• First run in 1861 under the banner of the Victorian Turf Club and won by the Etienne de Mestre-trained Archer who beat favourite Mormon by six lengths.

• Archer came back in the second running (1862) to beat Mormon, this time by eight lengths, a record margin that still stands (it was equalled in 1968 by Rain Lover).

• Trainer Bart Cummings claimed the first of an incredible 12 Melbourne Cups in 1965 with Light Fingers.

• Although Archer won the first Melbourne Cup with ridiculous ease the time recorded for the two-mile race was 3:52.00.

• There are 25 three-year-old winners with Cross Counter the last one.

• There have been no dead-heats for first in the race but Topical and Gaine Carrington tied for third in Hall Mark's 1933 Cup and Lahar and Zazabelle also dead-heated for third in the 1999 Cup won by Rogan Josh. Note: We came very close in 2008 and 2011.

• Harry White steered the Bart Cummings-trained Think Big to successive victories in 1974 and 1975. He was back in the winner's circle again with Arwon in 1978 and another Cummings' mount Hyperno in 1979.

• Think Big failed to win a race in between his two Melbourne Cup wins.

• Rising Fast would again win the Caulfield Cup in 1955 before running second to the Tommy Smith-trained Toparoa in the Melbourne Cup.

• Peter Pan was unable to contest the 1933 Melbourne Cup due to muscular rheumatism.

• Perhaps the unluckiest of all Melbourne Cup runners was Shadow King who ran in six Melbourne Cups between 1929 and 1935 finishing third behind Phar Lap in 1930, second behind White Nose in 1931, third behind Peter Pan in 1932 and second again behind Hall Mark in 1933.

• Back in 1869 the VRC introduced a four day Spring Racing Carnival format.

• In 1875 the Melbourne Cup is first run on a Tuesday, prior to that the race was run on Thursday.

• The three-year-old filly Briseis (1876) created a record that is never likely to be equalled, winning the VRC Derby, Melbourne Cup and VRC Oaks in the space of six days. She was ridden by 13 year old Peter St Albans.

• Two years after the race being transferred to a Tuesday, in 1877 the first Tuesday in November was declared a public holiday in Victoria.

• 1882 was the first year bookmakers were licensed to bet on the Melbourne Cup.

• In 1894 Strand starts are introduced to Flemington for the Melbourne Cup.

• In 1925 the ABC provides the first transmission of the Melbourne Cup.

• Phar Lap (1930) won the Melbourne Cup as the shortest priced favourite in the history of the race at 11/8 on. He had to be hidden away at Geelong before the race after an attempt was made to shoot him and only emerged an hour before the race time of the Cup.

• In 1931 the totalisator (TAB) operated for the first time at the Melbourne Cup.

• In 1946 the Photo-finish System was first introduced to Flemington.

• In 1958 starting stalls were used for the first time in a Melbourne Cup.

• Fashions on the Field first held at the Carnival in 1962.

• Maree Lynden was the first female to ride in the Cup on Argonaut Style in 1987.

• 2007 was the first time two female jockeys have contested the race (Lisa Cropp on Sculptor and Claire Lindop on Dolphin Jo).

• Michelle Payne became the first woman to win on Prince Of Penzance in 2015.

• Sheila Laxon, with Ethereal (2001), became the only woman (officially) to train a Melbourne Cup winner until Gai Waterhouse did it in 2013 with Fiorente.

• 2003 holds the record for the biggest crowd recorded at Flemington with 122,736 racegoers.

• Makybe Diva (2005) broke her own weight carrying record for a mare to victory by winning with 58kg.

• In 2014 Germany won its first Cup when Protectionist for Andreas Wohler scored a massive win.

• Godolphin scored its first Cup after many years of trying when Cross Counter easily won under Kerrin McEvoy giving him his third Cup. It was a UK trifecta also in 2018.

• Red Cadeaux was second in three Cups before his sad demise when running in his fifth in 2015.

• The 2019 Melbourne Cup prize money rises to $8million with the winner getting $4.4million for connections. 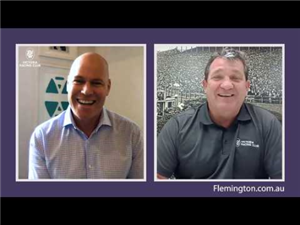 Have you ever wondered what it’s like to look after the grounds of Australia’s premier racecourse? F... Have you ever wondered what it’s like to look after the largest public rose garden in the southern h...

VRC In Conversation With Amanda Ross…brought to you by Lexus 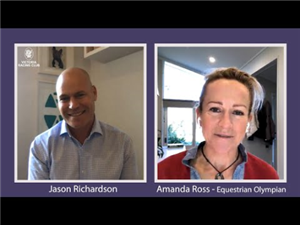 In this episode Richo sits down with Australian Olympic eventing rider Amanda Ross to learn about h...