Ulusaba kicks up from a low draw. Cyber Intervention (7) has finished second in his two runs so far this prep. Kept ticking over since his latest outing with a Warwick Farm trial. PRIMITIVO (2) is racing consistently. Gets reunited with James McDonald with the pair winning their lone outing in partnership. ULUSABA (10) appeals down in the weights off a midweek win at Canterbury. Should land in front with minimal fuss from barrier 1. MATOWI (12) has each way appeal off a last start placing at this course and distance. EXASPERATE (9) has been racing consistently in Victoria. Heads up the highway and gets Bowman in the saddle. SELECTIONS: Straight out Cyber Intervention.

As a FREE Racing and Sports offer you can download the Randwick Computer Card here.

Pace from the low draws with 4, 6, 7 all prominent. Good wave behind them to keep things very honest. Tavisan (9) resumed from a spell and despite being very easy in the betting he ran right away to win well. He's always been a talent and based on that he is ready to put it all together this time around. 1200m can suit better. ROX THE CASTLE (7) had a fantastic summer preparation and he resumes with a good winning hope in this. Similarly AGE OF CHIVALRY (13) came a long way last time around and while he will definitely be better for this return run he has to be taken seriously. Big talent. SHERIFF JOHN STONE (10) and USAIN BOWLER (11) are going to be around the mark in this grade as they invariably are. SELECTIONS: Win bet Tavisan who looks back in business.

The Administrator, Coastal Boy and Supervisor are among a few of these that can push forward early. Expect a genuine tempo. Sienna Rose (6) is a third up specialist having won her two previous attempts and she looks ready to fire again after placing at both runs this time in, the latest a closing second when beaten just half a length. Races well at this distance and looks ready to win. The latest effort of SPENDING MY TIME (9) was better than it appears on paper having boxed on in stronger company. Had scored when resuming at Toowoomba two back and has each way appeal third up. The speedy THE ADMINISTRATOR (5) has run close seconds at his past two at this course after scoring at Ipswich. Expect him to give a sight again. PRINCESS CAVALLO (15) has claims off a win here two back. SELECTIONS: Sienna Rose is unbeaten third up and is ready to score again.

Pace drawn inside and out in this. Rowsthorn (9) can camp on the back of that and rush home. She did that on debut and looked good. After a spell and trial win, she has blinkers on and the stable is really firing. Tough to beat here. WANAASA (8) likes to run along and it worked wonders two back. Would prefer to get some control which might not be likely. MISS LABELLE (4) has raced against better when last in work. They were decent form races as well. SUPLEX CITY (3) rarely runs a bad race. He will be back and running on. AKKACAN (1) drops in class today. He could be dangerous. SELECTIONS: Like Rowsthorn here.

Rebel King probably leads with Saracino, Lockroy handy and perhaps How To Fly from a good gate. Not so much speed for a 1000m race. Lockroy (4) has been kept fresh since stretching Valour Road here in June and if he can run up to that effort he will take plenty of beating. DON'T FUSS (7) fought on hard to stave them off here two weeks ago and drops 5kg. Wide gate no help but respect. SARACINO (10) signalled a return to form second-up with a solid effort behind Don't Fuss. Has claims. PROFIT STREET (3) loves Belmont and is a threat fresh while REBEL KING (1) could give a sight. SELECTIONS: Going with Lockroy. 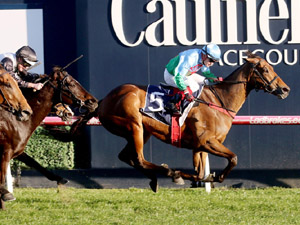