Racing and Sports highlight our standout plays for Australian TAB meetings on May 16.

EMIL (2) looks to have been set for this race having won two of his six third up runs in the past and four of his seven starts over the course and distance. He is suited dropping back to this grade having run well in stronger races at both starts back from a spell. Despite an awkward draw he looks hard to beat. AMERICAIN TYPHOON (1) creates plenty of interest here fourth up with the Blinkers going on. He drops sharply in grade off an excellent run two starts ago behind the talented National Guard and an even effort last start behind Tooradin. Look for a forward showing here. DOUBLE DELIGHT (10) ran into a smart type last star in Mimi's Award but is better suited here. Include. PERISCOPE (6) has only won one race but is yet to miss a place third up. Include in the exotics. FOUR OUTLAWS (3) is racing well and can figure in the finish with the right luck from the outside barrier. SELECTIONS: Emil looks placed to advantage.

As a FREE Racing and Sports offer, below is the Casterton Computer Card.

This looks a suitable race for CHOOSDAY NIGHTS (3) to continue on her winning ways. Goes well at this distance with a win and a second from two starts and Lever has been in the irons for all seven starts to date. The testing material. TOULON FACTOR (2) is nearing another victory after a close-up second last time out. Will strip fitter third-up from the spell and can be right in the finish. CRIMSON PETAL (7) has placed over the mile and can earn a cheque. FIVEASH (5) improved for a solid third last time out and is one for the multiples. SELECTIONS: Choosday Nights to win.

Garage Days (5) improved again missing a lip at Pinjarra after settling back. The extra trip suits and he's a promising galloper who can come over the top of them. INAHAPPYDAZE (9) will run along and is ready to win reaching peak fitness. Gets the hot hoop first time and is the danger. TAKE ME THERE (10) has missed a whisker the last two and keeps improving. She's in the mix. QUINTUS (2) will use the low gate and gets a handy 2kg claim today. Has to see out the longer distance. SELECTIONS: Keen on Garage Days.

Crackerjack Prince (1) is a talented type yet to miss the placings and back from an eight month spell. Rates a top chance in this field. Trip suits fresh and will be winding up strongly. REVHEAD (5) is yet to break through after five career starts but in the minors at Kilmore two back before finishing fourth at Kilmore last start. Expected to be in the mix. HANDBALL (3) makes return after six months. Went close last run before a break and comes into calculations. FELIX FIORENTE (2) looks to have the ability. SELECTIONS: Crackerjack Prince gets chance.

Mookareena (2) finds herself well in at the weights after two good performances at Listed and open level. Finished only 1.4 lengths behind the leader in a harder race last time out. The one to beat. GIRLS ARE READY (3) was well beaten last start at Wagga Wagga but had been racing in better company prior to that. Has plenty of class about her and McDougall hops on. Won't be far away. ONSETTLING DOWN (4) has won two in a row and returns to his home track. Was a winner over this track and distance two starts ago and is unbeaten at the Queanbeyan 1460m. Will be right in the finish. JOE'S JOY (1) is first-up today. Has only been placed once when fresh but finds herself in easier company today. Will be hitting the line hard late. TRAPPER TOM (8) has been okay without winning lately. Gets in well at the weights and has run well here in the past. Winning chance. SELECTIONS: Mookareena to show her class and win.

Renouf (1) came back to racing in good order before blitzing his rivals this grade as favourite. Ran a standout figure for this contest and should be winning again. SPENSIERATO (3) is a former Victorian resuming after 65 days for the Smerdon yard. Has raced favourite the last three and go on the 1L defeat two-back at Geelong. Keep very safe. THREE PHASE (6) finished just ahead of the best the latest after an awkward start and draws better today. In the mix. SELECTIONS: Keen on Renouf. 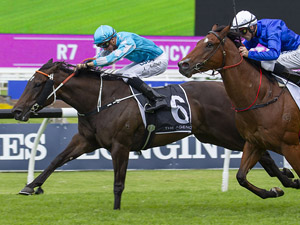