More Group and Listed trials on the course proper with any number of big names going easily through their paces without coming off the bit.

Greysful Glamour and Sweet Deal\dominated the 1000m heat from the front. They sprinted together over their last 400m with plenty in hand. Behind them Prince Fawaz,Happy Clapper, Pancho and Something Fast all worked to the line under big holds.

Greysful Glamour sticks the grey nose out to beat Sweet Deal in a 1000m trial @royalrandwick on Thursday - behind them are the likes of Group 1 winners Prince Fawaz, Happy Clapper and Verry Elleegant. @tabcomau @7horseracing @mark_mnracing pic.twitter.com/kDjYuraOHB

Redzel had the blinkers back on, always the key ingredient for him, and showed the benefit of his recent trial second to lead and win the 900m heat. It was adequate work but runner-up Quackerjack trialled equally as well if not better over the last 400m. The eye catchers behind them were California Zimbol, I Am Excited and Libertini while Lanciato and Funstar were not asked for serious efforts.

The impressive last 200m by I AM EXCITED confirmed her form from her first-up trial and she is on the boil for a bold first-up performance.

Richie's back in business! Dual #TheTABEverest winner Redzel is too quick over the 900m @royalrandwick on Thursday and take a look at star fillies Libertini and Funstar in behind having easy trials! @tabcomau @SnowdenRacing1 @7horseracing pic.twitter.com/t0NtpExE3h

In the A Grass trials there were notable efforts the promising maiden Heart Breaker (ready to win), and eye catching trials in the open heat for fillies and mares from Aspect Ratio, Mayaaseh and Booker.

An interesting trial winner @royalrandwick on Thursday was I Am Superman who came to Sydney with @MDOCallaghan for the #GoldenEagle and is now with @SnowdenRacing1. He wins a 1040m trial over talented mare Seasons. @tabcomau @7horseracing pic.twitter.com/jcyvyXdiFX

The @GaiWaterhouse1-Bott trained Yao Dash looks to have returned in good order, finishing off strongly to win his trial at @royalrandwick this morning. The speedy 3YO is currently $15 in the 'Pre Noms' Market for the Randwick Guineas pic.twitter.com/fK6fqNebEs 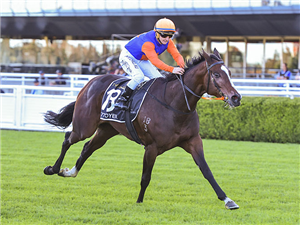