Chris Scholtz reviews Sydney barrier trials at Warwick Farm on March 5 and 10 and Randwick on March 12.

A big set featuring a number of major race contenders, not the least being the top Melbourne youngster HANSEATIC, KEMENTARI and ANAHEED.

Nothing between Group 1 winning duo Kementari and Super Seth at the end of their 1050m trial @royalrandwick on Thursday with Special K getting the nod. @tabcomau @FreedmanRacing @godolphin @7horseracing pic.twitter.com/XHpwYySomg

Godolphin had to be happy with the trials from CHENIER, BEST OF DAYS, HOME OF THE BRAVE and SPECIAL SNAP while the Snowdens played a big hand as usual with a host of good trial efforts including MILITARY ZONE, BRAVE SONG; HEROESS; SMART IMAGE; BRAZENPINE and MILITARY MAGIC.

KEMENTARI (James Cummings): His comeback as a gelding is going well judging by the way he won his second trial over 1045m in a sharp 62.80 (34.40), controlling the trial from the front and working well within himself to the line to hold off a late sprint by the top Melbourne 3YO SUPER SETH.

He's a $7 chance with @tabcomau in Saturday's week's @Longines Golden Slipper, @godolphin colt Hanseatic and @KPMcEvoy take out a 1050m trial @royalrandwick on Thursday.
What do you make of his Slipper hopes?@7horseracing @FreedmanRacing pic.twitter.com/GpTt7foePN

HANSEATIC (Anthony Freedman): No doubt he will be a big player in the Golden Slipper after this trial win. Handled the clockwise way of going with ease to win his 1045m heat after tracking very wide. Time wasn't flash (64.23; 35.40) but showed his class to respond with a sharp turn of foot in the soft ground at the 200m.

ANAHEED (Peter & Paul Snowden): Scooted through her favoured soft conditions to record the fastest time of the 1045m heats (62.55; 34.00), travelling easily outside the lead before asserting herself to score a soft three lengths win. She's in the right form to perform well over the carnival.

Chenier had a good hit out in this morning's trial...next stop Rosehill Guineas @FreedmanRacing @godolphin pic.twitter.com/6igVyTPPcn

They got through only 10 of 20 scheduled heats before the weather conditions became too severe to continue. The last three heats were run on the synthetic track before the session was abandoned.

Greg Hickman is tightening the screws on PIERATA with the gun sprinter put into his 807m heat from the start in contrast to his earlier trial at Randwick on February 17 when he went around at the back of the field for untested exercise.

He couldn't be faulted with a strong showing in the heavy conditions, recording an acceptable 48.14 with his last 600m in 34.05 the fastest of the session. The good mares PRETTY IN PINK and MADAM ROUGE put in eye catching efforts behind him. 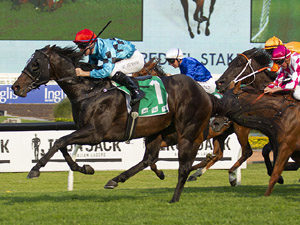