The 2YO heats created the most interest as they featured several smart trials from unexposed youngsters preparing to make a late season start to their careers.

The unraced heat winners to make an impression included YARDSTICK, CARNEGIE SONG, WAAIFIYA and COMMANDING MISSILE. The winners with race experience to stand out were ON THE LEAD and TICKET TO RIDE while SUGAMO, WE HAD TOO MANY, PRIME STAR, SIDEARM and ARGENTEUS were noted 2YO placegetters.

The heavy track and desire of riders to track wider as the session progressed made time comparisons inconsequential.

The smart Les Bridge-trained filly MADAM LEGEND showed she was holding her form with a strong open heat win while her maiden stablemate ABSOLUTE LEGEND is ready to perform judging by the style of his heat win.

The classy former Kiwi mare RONDINELLA caught the eye in her first trial for John O'Shea. Her progress will be followed with interest.

Les Bridge's Madam Legend leads all the way in her trial at @royalrandwick this morning. She's a last start winner at @newcastleraces_ and continued that form today pic.twitter.com/7LIPKT0PmE

ROSINA KOJUNUP (Bjorn Baker); This 4YO mare by Shamus Award creates a lot of interest as she has not been seen at the races since late 2018 when she won back to back at Hawkesbury and Warwick Farm before finishing fifth in the Gosford Guineas. She came back to win two trials that we noted with interest late last year before having another 29 weeks off prior to this sharp trial win over 807m (47.50; 34.01), leading easily and held together under no pressure to beat the well performed Single Bullet. They have persevered with her as she obviously has the ability. 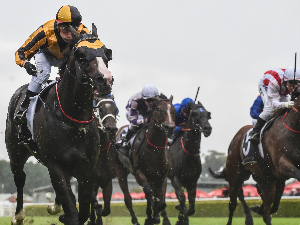