BIVOUAC (James Cummings): He was the star attraction and lived up to his reputation with a classy win in his 1050m heat (63.63; 33.59), notably running the fastest closing sectional of the seven 1050m heats and an overall time he could have improved on as he had plenty in reserve after travelling strongly in second before taking charge turning for home under a big grip from Hugh Bowman. With two strong trials under his belt he looks in great order for the start of his Everest campaign.

CHAT (John Thompson): Looks to have come on nicely from a good autumn campaign with two strong trial wins to have him ready for a bold first-up performance. Did it easily travellling easily in third behind the pace, peeled out at 200m and went to the line under a strong hold to record a fast 1050m heat win (63.20; 34.34), although Bivouac ran the fastest closing sectional of the session.

This session featured the first  2YO trials of the season with two heats over the short 740m course with Lee Curtis providing both speedy winners I LOVE LUCY (44.07/33.75) and AVARICOUS (43.36; 33.74). Both are racy types by first season sires Maurice (I Love Lucy) and Extreme Choice (Avaricious) but judgement will be reserved until after we get to see more of these youngsters in later trials.

Avaricious, a $200,000 @mmsnippets buy for @CurtisRacing, wins the second 2yo trial @royalrandwick on Tuesday. She's by Extreme Choice and is a half-sister to Cultural Amnesia. @tabcomau pic.twitter.com/MH92gKrn1M

DENIKI (Mark Newnham); This impressive Not A Single Doubt filly was highlighted when she won a Randwick trial on August 4 and she was again a star performer, maintaining her unbeaten record in three trials since she last raced in March. She is possessed with brilliant natural speed and was able to lead clearly before sprinting to the line under a hold for a soft 5.5 lengths win in 46.44 (33.45) with plenty up her sleeve. Trial watchers are getting impatient waiting for her return.

BELLUCI BABE (Bjorn Baker): Not seen since her a debut win at Kembla Grange in January this 4YO mare is also unbeaten in three trials and again showed she is a natural runner with a brilliant 4.8 lengths win in the fastest 800m heat of the day (45.61;32.72). She led the very fast SPACEBOY easily and while he was quietly ridden it is the first time he has been beaten in 10 barrier trials – says plenty about her speed.

FASIKI (Joe Pride): Class mare did her thing in easy style, repeating her impressive trial win at this course on August 21 when she had the better of the star sprinter GYTRASH. This time she did all that was necessary to score by a soft 1.3 lengths and while her time was one of the slowest 800m heats (47.03; 33.60) it was evident she had plenty to offer and is in great order for her return to racing.

An armchair ride for @brentonavdulla on classy mare and #TABEverest hopeful Fasika as she easily takes out an 800m trial at Warwick Farm on Thursday. Next stop the G2 Sheraco Stakes on September 12. @tabcomau @PrideRacing @tricoloursR pic.twitter.com/mTcrhIMipD 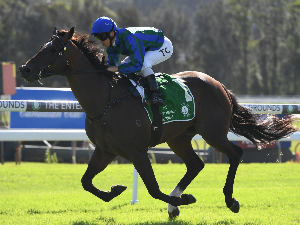