Off the low draw perhaps they roll with Gailo Chop who is at his best ridden that way. First up though and doubt they really fly along. Lead largely up for grabs. Master Of Wine may be more positive? So Si Bon has blinkers going on. Gatting was nowhere near them fresh but was on speed winning this last year. Fierce Impact (4) won the Cantala here on Derby Day and he too looks well placed second up off a really good return at 1400m. Hard to beat. Big interest in the return of RUSSIAN CAMELOT (13) who faces far and away his toughest test here but he has done nothing but impress to date and looks sure to measure up. KINGS WILL DREAM (7) ran really well first up at 1400m and he's much better suited up to the mile now and back to Flemington where he is three times a winner, including the Turnbull last spring. DALASAN (11) was looking for this trip when getting into an awkward spot in Adelaide last time. Lengths and lengths harder here but he's a good horse, as is MASTER OF WINE (9) who did nothing first up but can be a sharp improver now. SELECTIONS: Fierce Impact appeals each way.

As a FREE Racing and Sports offer, below is the Flemington Computer Card.

Small but select field in this year's Group 2 Theo Marks Stakes. Both Fender and Special Reward have good early speed and can set a genuine tempo. Special Reward (3) only went down narrowly first up and is expected to show good improvement for this. Key booking with Nash taking over and he looks likely to take up the running. Well placed on best form and should prove hard to beat. FUNSTAR (5) never got warm first up, but this is more suitable and she is unbeaten second up (3/3). JMac sticks and she looms as a major threat. WILD PLANET (6) stuck on well first up and with further improvement he has to be respected, while NICCANOVA (2) also holds claims on debut for his new stable. SELECTIONS: Keen on Special Reward.

Very strong early tempo with Toryjoy, Sabkhat and Supergiant leading the way. Toryjoy (4) heads north with good form in NSW. Beaten less than a length in the Listed Rowley Mile last start after leading and fighting well to place at her previous two in Sydney. Drawn to advantage and could be hard to get past. KAONIC (1) returned to the winners' circle when he ran on hard to get there in the final strides last time. Up in the weights and back in trip but maybe able to go on with it. SKATE TO PARIS (3) just missed when gunning for the hat trick last start, running on to miss by a head. Hard to knock that form. SUPERGIANT (6) was caught wide fresh and won his only previous second up attempt so expecting improvement up in trip. ONE FOR BETTY (10) is racing well in lesser company. SELECTIONS: Toryjoy to win off strong NSW form.

Strong early tempo with several going forward from this start. Melody Man (3) could be one of them as it worked so well last time. He led from a wide draw and bolted away with a maiden. Bred to want this and even further now. SEBONNA (1) had too much to do second up. Back into this company should help him rebound. BACK POCKET (11) is generally around the mark. He draws to get the same run as last time. LEORBIT (5) won with a little ease at Gawler but it was an easier race. The added ground has to help. CAN'T BLUFF ME (2) is ever consistent but will be giving away a start. SELECTIONS: Staying with Melody Man.

Super Teroitoa can press forward with Tycoon Storm also drawn out. Super Ex and Lacevinsky have some speed too. Ration Aly (8) just got the job done to make it three straight when second-up. Hard to knock. LACEVINSKY (2) was run off the track by another runner when resuming at 1000m and did well to pick back up. Trip and draw are big pluses. Good chance.  TYCOON STORM (6) is an up and comer who was an easy winner at Northam second-up. Will need early luck but can measure up. POINT TAKEN (7) and DEVOTED STAR (10) have claims. SELECTIONS: Backing Ration Aly. 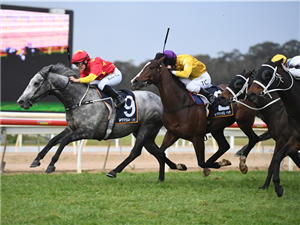