Chris Scholtz previews the feature Kembla Grange meeting on November 20 with selections for all races plus Trial Watch and Blackbook runners.

RACE 2: RACE 3 (8) DRAGONSTONE: This is all about the potential of this lightly-raced 3YO who showed plenty in his first prep last season with a win and two placings against some quality types, all on affected tracks. His recent trial win at Warwick Farm on a good surface was excellent, spearing along the rails from behind the pace with sharp acceleration that indicates he will be better on top of the ground. Astute stable has found an ideal first-up target for him as he will be carrying no weight with the advantage of Tyler Schiller's claim, if even if he cannot take his full allowance.

RACE 6 (3) BLUFF 'N' BLUSTER: Attractive odds for a horse coming out of a strong Goulburn Cup (1400m) on October 31 where he finished a close third in a blanket finish after being held up for a clear run over the last 300m. He rises 4kg off that effort with the return to this easier company but it's easy to allow him improvement from the Goulburn race as it was his first outing since he was placed in this class over 1400m at Randwick on September 15. Strong record at this distance and handles all type of going.

RACE 9 (13) SUAVE: Honest Godolphin 4YO is going well this prep, winning second up over 1400m at Warwick Farm on a soft track before strong placings in good form races over the same distance at Randwick and Rosehill. Placed under 60kg at his only previous 1600m start and should relish the return to the trip after posting the best last 200m of the day at his last start at Rosehill when closing impressively under 59kg for third behind Zoushack at Rosehill. Well treated dropping 4.5kg off that run.

RANDWICK November 11: Classy grey BERDIBEK worked well within himself to win his open heat over 1080m (65.41; 33.72) in his first outing after a break. The Villiers Stakes and other features up to 2000m will be ideal summer targets for him.

WARWICK FARM November 3: DRAGONSTONE showed plenty of potential last season and his return trial points to him going right on with as a 3YO. Tracked the speed on the fence in his 803m heat and when it opened up he railed through quickly and showed sharp acceleration to quickly put the trial away, cruising the line under a soft ride (46.66; 33.20). The time standard for the morning was set by the good mare OUR BELLAGIO MISS doing it well to win a fast run 803m heat (46.19; 33.19). The form in the polytrack heats over 740m looks solid enough with some smart wins from QUEEN BELLISSIMO (44.69; 34.20) and TINKER McPHEE (44.28; 33.95). CAPO STRADA finished second in his 800m trial (46.81; 33.47) where he was the flashing light running home strongly to be beaten a half length after he was four lengths back on the fence at the 600m. He railed up full of running inside the last 200m where he had to come off the heels and loved the way he ran through the line late to confirm the talent he had shown in a Hawkesbury trial win on October 18.

HAWKESBURY October 18: Godolphin has a nice prospect in the maiden heat winner CAPO STRADA who shared the best time among the eight 800m heat winners (46.96). In the open heats over 800m the Brad Widdup-trained QUEEN BELLISSIMO (47.28; 33.22) did all that was required to post a smart win.

TOP RANKED: Showed his class. Better for the run.

VANCOUVER'S CROWN: Needed the experience. Plenty of scope for improvement

WAR ETERNAL: Ready for something longer. 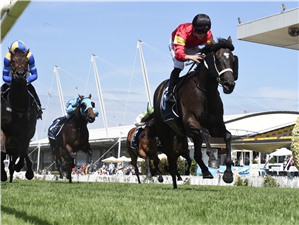