The first leg of the treble was kicked off by Polestar (2 c ex Primus by Fuji Kiseki), who shed his maiden at the second time of asking over 2000 metres on the dirt at Chukyo.

Having finished second on debut, the two-year-old finished strongly to clinch victory within metres of the line, coming away with a neck victory over Plaisir Minoru (Cape Blanco), while B I Felipe (Henny Hughes) finished another length away in third.

The stallion's second winner was provided by Zodiac Sign (2 c ex Reinette Groove by King Kamehameha), who shed his maiden status at the second attempt when landing a race over 2000 metres at Nakayama.

The colt came into the race off the back of a second place finish at Hakodate on July 19, Zodiac Sign put that experience to good use, posting a two length victory over Apollo Miracle (Apollo Kingdom), while Baji O (Rulership) finished another half a length away in third.

The treble was completed by Bloemendaal (2 c ex Blumenblatt by Admire Vega), who made a winning debut over 1600 metres at Nakayama.

The two-year-old colt stayed on strongly to hold off the late charge of Giulio (Leontes) by a nose, while Cover Girl (Daiwa Major) was another length and a quarter away in third.

Bloemendaal is the seventh winner out of Kyoto Mile Championship (Gr 1, 1600m) winner Blumenblatt (Admire Vega), who is herself a half-sister to Listed scorer Joyful Heart (Sakura Bakushin O).

The Shadai Stallion Station-based Maurice has stood at Arrowfield Stud for the past three seasons, but due to coronavirus the son of Screen Hero (Grass Wonder) did not return to the Hunter Valley stud this season. He currently sits at the head of the leading first season sires table in Japan by earnings. 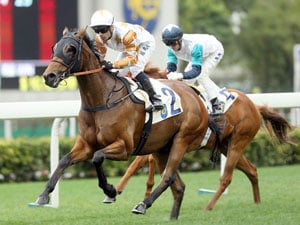