Sent off at huge odds of 178/1, the six-year-old gelding emerged from the pack with 100 metres left to travel and gained the lead inside the final 50 metres, just having enough to stave off the late advances of Australian-bred Stronger (Not A Single Doubt), eventually beating him by a short-head. Fellow Australian-bred Beauty Applause (Stratum) was another length away in third.

“I still do not believe it,” said Ting, celebrating the most important win of his training career since being granted a full licence in 2018/19.

“Maybe the pace was a bit fast and it was suitable for him and it was a comfortable race. We had a lot of luck.

“After the start, I didn’t think we could win. Over the last 200 metres, I thought he had a chance – only then.

“At the beginning of the race, I didn’t think he could win. I was hoping he could run a place.

“This is the biggest win for me. Hopefully, there’s some more.”

Asked if a tilt at crack Japanese sprinter Danon Smash (Lord Kanaloa) in the Chairman’s Sprint Prize (Gr 1, 1200m) was feasible – along with a HK$180,000 supplementary entry fee – Ting was non-committal.

“At this stage, I don’t know. The horse’s fitness is everything. He suffers from back problems, so I don’t know,” he said.

“He is an amazing horse – his name is Amazing Star.”

Amazing Star was purchased by SG Lennox for NZ$30,000 at the 2016 New Zealand Bloodstock Karaka National Yearling Sale and he takes his record to seven wins from 22 starts, with prize-money earnings of HK$9,062,690.

The gelding is one of two winners out of Listed-placed Royal Academy (Nijinsky) mare Bright Abyss, while this is also the same family as Grade 1 winner Snow Chief (Reflected Glory) and Grade 2 scorer Mujaazif (Alydar). 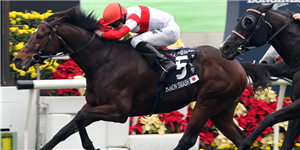