The victory of the Tony Cruz-trained Buddies (6 g ex Gladwell by Anabaa) in Sunday’s Celebration Cup (Gr 3, 1400m) at Sha Tin provided his Coolmore-based sire So You Think (High Chaparral) with his 35th stakes winner.

Buddies had been winless in nine starts since November last year and started as a 23-1 outsider. He made all under Matthew Chadwick and held on in the final 200 metres to score a three quarter length victory over Tourbillon Diamond (Olympic Glory). Favourite Sky Darci (Darci Brahma) was the same distance back in third.

“Not really a surprise because I expected to be up the front,” Cruz said. “I expected him to lead this race and, on this track today, I think it was an advantage to lead. He had a light weight (113lb), so I got the right jockey on him.

“He’s a good front rider, Matthew Chadwick. It was not a big surprise to win it. I expected him to run in the first four. Last season, he ran fifth (in the same race behind Golden Sixty) and this year he is much fitter for the race.

“This horse has won by leading before, he’s an honest horse but I know he is at his peak today.”

Cruz said that the Australian-bred will target the Premier Bowl Handicap (Gr 2, 1200m) next.

Buddies was bought for $320,000 by George Moore Bloodstock from the draft of Yarraman Park Stud at the 2017 Inglis Australian Easter Yearling Sale. He is the first stakes winner and is one of two winners out of stakes placed Anabaa (Danzig) mare Gladwell who was bought by Magic Millions as agent at the 2014 Magic Millions Patinack Farm Complete Dispersal. She produced another colt by So You Think last year before slipping to Churchill (Galileo).

So You Think’s stakes winners are headed by seven Group One winners in Quick Thinker, Think It Over, La Bella Diosa, Nakeeta Jane, Sopressa, D’Argento and Inference. 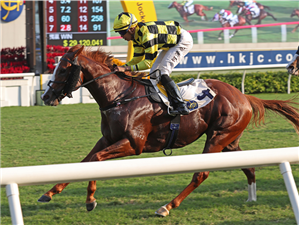