All Saints’ Eve landed a shock victory in the fillies three-year-old maiden at Warwick Farm.

John O'Shea continued his good run of form on Wednesday, when the well-related filly All Saints' Eve (3 f Sacred Falls - Halloween by Encosta De Lago) landed a shock victory in the fillies three-year-old maiden at Warwick Farm. Having her third career start, the New Zealand-bred filly weaved her way through the field to come away with a three-quarter length victory over Rose To Victory (Smart Missile) in second.
Raced in partnership that includes Waikato Stud, who stood her late sire Sacred Falls (O'Reilly), and Anthony Mithen's Rosemont Stud, the filly is out of Encosta De Lago (Fairy King) mare Halloween, who has produced four other winners, from seven foals to race, headed by New Zealand 1,000 Guineas (Gr 1, 1600m) winner Hasahalo (Savabeel). Hasahalo was purchased at the 2016 New Zealand Bloodstock Premier Yearling Sale by Go Racing for NZ$110,000 from the Waikato Stud draft.
Halloween herself is out of Listed winner La Lagune (Danehill), making her a half-sister to Generous Nature (Carnegie) - the dam of Group 2 winner Savvy Nature (Savabeel) and Group 3 winner Addictive Nature (Savabeel). Waikato Stud will offer a Savabeel (Zabeel) half-brother to All Saints' Eve at Book 1 of the upcoming New Zealand Bloodstock Karaka National Yearling Sales Series. The colt is catalogued as Lot 635.
Halloween was a shrewd purchase by Mark Chittack's Waikato Stud, who paid Hallmark Stud NZ$11,000 for the Encosta De Lago mare at the 2013 National Weanling, Broodmare & Mixed Bloodstock Sale, and since the New Zealand operation have sold her progeny for an aggregate of NZ$354,000.
Multiple Group 1 winner Sacred Falls, whose oldest crop are three-year-olds, died from liver disease in December last year and he has 31 lots catalogued during Book 1 of Karaka 2020, which gets underway on January 26.
The filly, who was ridden by visiting English jockey Tom Marquand, was sent off the unfancied 50/1 shot and O'Shea said he thought she was overpriced heading into the contest.
"I thought the price was wrong and I said as much publicly that she would run better than her price indicated," O'Shea told Sky Thoroughbred Central.
"The progeny of Sacred Falls are lovely horses. They are very relaxed.
"We put the hood (blinkers) on her to get her mind on the job.
"It was a good day for O'Shea, who won both of the three-year-old maidens at Warwick Farm, having sent out gelding Broadside Amour (3 g Helmet - Paeroa by Dubai Destination) to win the Territories at Darley Maiden Handicap (1400m) earlier in the afternoon.The son of Darley's Helmet (Exceed And Excel) was purchased by Champion Thoroughbreds for $60,000 from the Tartan Thoroughbreds draft at the Magic Millions Gold Coast Yearling Sale. 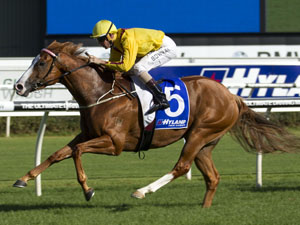