The four-year-old filly came into the race having won her four previous starts and she made it an impressive five when she beat Noire (Foxwedge) by just over a length with another half a length back to Amangiri (All Too Hard) in third.

"It's great to get that win. I'm thrilled," said Baker.

"She just keeps stepping up and she's in great order."

A tilt at the Coolmore Legacy (Gr 1, 1600m) will be considered for Positive Peace who is owned by Steve Gillard.

Purchased by Bjorn Baker and Blandford Bloodstock for $260,000 at the 2017 Inglis Australian Easter Yearling Sale from the draft of her breeder Kia Ora Stud, Positive Peace is out of Listed-winning Reset (Zabeel) mare Warpath making her a sister to stakes-placed Alkaashef and a half-sister to Group 3-placed Rotator (Not A Single Doubt).

Warpath herself is a half-sister to Limerock (Charge Forward) - the dam of Group 3 winner Limestone (Helmet).

Warpath was covered last October by So You Think (High Chaparral) after missing to Russian Revolution (Snitzel). She has a yearling filly by Your Song (Fastnet Rock) who was bought for $70,000 at this year's Inglis Classic Yearling Sale by Matt Dale. 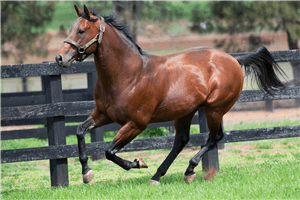