Jack The Lad gets job done at Warwick Farm

The Chris Waller-trained Jack The Lad (3 g I Am Invincible - Luluoru by Redoute's Choice) broke through for his maiden victory at Warwick Farm on Wednesday and in the process added a valuable pedigree update for his Written Tycoon (Iglesia) half-brother, who is set to go under the hammer at Inglis' Ready2Run Sale on October 20.

The three-year-old son of I Am Invincible (Invincible Spirit) was having the second start of his career having run third on debut and he went two better on Wednesday when beating Much Much Better (Stratum) by neck, while Seleque (Deep Field) was a further three-quarters length back in third.

Purchased by his trainer and Guy Mulcaster for $575,000 at the 2019 Magic Millions Gold Coast Yearling Sale from the draft of Milburn Creek, the gelding is the first winner out of unraced Redoute's Choice (Danehill) mare Luluoru. She is herself a half-sister to Listed winner and Grade 1-placed Topic (Discreet Cat) being out of Quiet Maggy (Quiet American) who was bought by Freyer Bloodstock for US$230,000 at the 2009 Keeneland November Breeding Stock Sale.

Luluoru's Written Tycoon colt was purchased by Astute Bloodstock and Smart Racing Stables for $115,000 at the Inglis Australian Easter Yearling Sale earlier this year and he will go through the ring at the Inglis Ready2Run Sale catalogued as Lot 40.

After missing to Coomore Stud-based sire Pierro (Lonhro) in 2019, the mare produced a filly by former Vinery Stud shuttler More Than Ready (Southern Halo) this year.

I Am Invincible is standing at Yarraman Park in the Hunter Valley for a fee of $209,000 (inc GST). 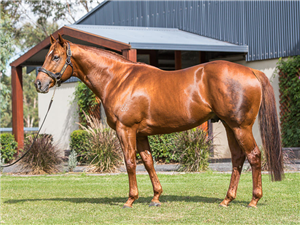