Cornflower Blue bred to be a legitimate Guineas contender

By Waikato Stud’s five-time champion stallion Savabeel (Zabeel), the filly be surprisingly looking to become the stallion’s only second winner of the Classic, with his daughter Hasahalo having taken out the 2017 edition of the Group 1, while he has also sired one winner of the male equivalent in the shape of Embellish, who landed the 2017 2,000 Guineas (Gr 1, 1600m).

Embellish, like Cornflower Blue, is out of an O’Reilly (Last Tycoon) mare and the potency of that cross came to the fore over the weekend, with daughters of the late Waikato Stud sire providing two new stakes winners for Savabeel which saw his tally move to 104.

The other winner bred on the cross was the Trent Busuttin and Natalie Young-trained Albarado, whose win in the Caulfield Classic (Gr 3, 2000m) on Saturday put him bang in the picture for the VRC Derby (Gr 1, 2500m) at Flemington on October 31.

Stakes winners bred on the Savabeel / O’Reilly cross now stands at 18, headlined by four Group 1 winners; Costume, Diademe, Savaria and the aforementioned Embellish. The cross fires at a healthy 13 per cent stakes winners to runners rate.

O’Reilly’s exploits as a broodmare sire are well documented, with the son of Last Tycoon’s (Try My Best) daughters producing 85 stakes winners, headlined by 15 elite level scorers, including Daffodil (No Excuse Needed), who won the New Zealand 1,000 Guineas in 2008.

Rated by Waikato Stud’s Mark Chittack as the best filly in the operations draft at the 2019, New Zealand Bloodstock Karaka National Yearling Sale, Cornflower Blue was forced to be withdrawn from the sale after being found to have broken her withers.

The filly is out of three time winner Tiffany Yellow, who is herself a sister to 2012 Concorde Handicap (Gr 3, 1200m) winner Mosse and 11-time winner Silver Sparkle, who was placed at Listed level in Macau when he raced as My Pony.

Parfore herself proved to be a good broodmare and she was crowned New Zealand Broodmare of the Year in 2014-15.

Parfore is also the dam of multiple Group 2 scorer Ball Of Muscle (Dubawi) and Listed winners Our Lukas (Generous), Donna Cattiva (Captain Rio) and Super Easy (Darci Brahma), who was crowned Singapore’s Horse of the Year in 2012 and 2013 and he now stands at Hallmark Stud New Zealand. 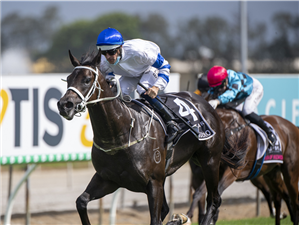