The two-year-old filly pulled well clear of the second-placed Garrire (I'm All The Talk), beating him by three lengths. Lamoree (Headwater) was another length and a quarter away in third.

Touchy Greeley is herself out of Listed winner Lahinch (Danehill Dancer) and she is also the dam of Group 3-winning pair The Bogberry (Hawk Wing) and Liscanna (Sadler's Wells) - the dam of Group / Grade 1-winning duo Brave Anna (War Front) and Hit It A Bomb (War Front).

In 2019 Touchy Greeley produced a filly by Vinery Stud sire Press Statement (Hinchinbrook), before foaling a colt by the same sire the following year.

Shalaa has sired 23 winners globally and his other winner in Australia is Listed scorer Shaquero, who finished a close second to Finance Tycoon (Written Tycoon) in the Gold Nugget Quality (1100m) at the Gold Coast earlier in the afternoon.

The son of Invincible Spirit (Green Desert) has 30 lots catalogued at next week's Magic Millions Gold Coast Yearling Sale. He had 69 yearlings sell in Australia last year for an average of $158,898 and top price of $600,000. 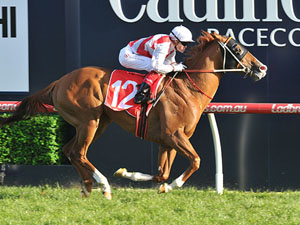