Settled towards the rear of the field on the rail, Profondo was taken to the outside when into the straight and ran on extremely well to score a good victory in heat 7 over 1050 metres to score by a length and a quarter in a time of 1:01.90. Uncaged finished second with another two and a quarter lengths back to Smart Little Miss in third. The time was the quickest of all the heats over 1050 metres.

Profondo is the first foal out of Group 3 winner Honesty Prevails (Redoute’s Choice) who is herself a half-sister to stakes placed Aerobar (Flying Spur) being out of Flavoured (Hussonet). Honesty Prevail’s colt by Arrowfield Stud shuttler Shalaa (Invincible Spirit) sold for $1.15 million to James Harron Bloodstock at this year’s Magic Millions Gold Coast Yearling Sale. She has a colt by Dundeel (High Chaparral) and missed to Written Tycoon (Iglesia) last year.

Gai Waterhouse and Adrian Bott had two juvenile trial winners at Randwick on Monday; In The Congo (Snitzel) taking out heat six by four lengths and Volcanic Rock (Hinchinbrook) posted a two and three quarter length victory in heat 8. Peter and Paul Snowden also had two two-year-old trial winners with Anchorage (Capitalist) posting a victory over 737 metres in heat 12 and Icing On The Cake (Astern) took out the following heat for the Snowden stable. 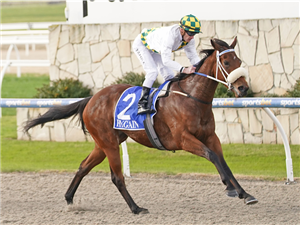