Second Group One winner for Kermadec and Divine Prophet, Extreme Choice and Not A Single Doubt add new stakes winners

Trained by James Cummings, Willowy beat Douceur (No Nay Never) by a head, with another two lengths back to Biscayne Bay (Sebring) in third.

Kermadec is standing for a fee of $11,000 (inc GST) at Darley’s Northwood Park this year and his first stakes winner was the triple Group One winner Montefilia.

First for Divine Prophet
See You In Heaven (2 f ex Shine On Anna by Anabaa) became the first stakes winner for Divine Prophet (Choisir) when she won Thursday's Ottawa Stakes (Gr 3, 1000m) on debut. Starting at odds of 8-1, See You In Heaven scored a decisive length and a quarter victory over Satin Love (Snitzel), an $800,000 Magic Millions Gold Coast Yearling Sale buy, with Bohemian Daisy (Hellbent) a close third.

Divine Prophet, who has two crops of racing age, stands at Aquis Farm where his fee this year is advertised at $16,500 (inc GST).

Starting favourite, the Chris Waller-trained filly, a $190,000 Magic Millions Gold Coast Yearling Sale purchase by Star Thoroughbreds and Randwick Bloodstock from the draft of her breeder Torryburn Stud, pulled clear to defeat Star Of Chaos (Zoustar) by six and a half lengths.

Flying Evelyn was a $500,000 purchase by John Sadler Racing from Arrowfield Stud at last year’s Magic Millions Gold Coast Yearling Sale and she defeated favourite, A Very Fine Red (Deep Field), by a half length.

Not A Single Doubt’s stakes winners are headed by 15 Group One winners. He was retired from stud duties in February 2020 after covering a book of 94 mares in 2019.

Brett Prebble found the gap on Flying Evelyn and came away to win the last race. 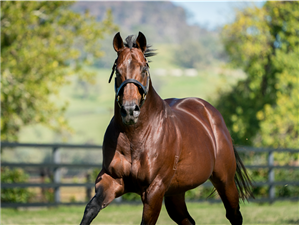