Russian Emperor had not raced since finishing third on debut in July last year and on Monday scored by a short-head over the Jessie Harrington-trained Lobo Rojo (Lope De Vega).

“When he switched out and the penny dropped he won well. Aidan’s could improve an awful lot, not through fitness, but just because they hibernate through the winter.

“He’s a group horse and if he gets a mile and a half he’s top notch.”

Trained by Mark Kavanagh, Atlantic Jewel won ten of her 11 career starts with Group 1 victories in the All Aged Stakes (1400m), Thousand Guineas (1600m), Memsie Stakes (1400m) and Caulfield Stakes (2000m). Her first winner was Pacific Ocean (Galileo) who scored over a mile in Ireland last year and she is a half-sister to fellow Thousand Guineas winner Commanding Jewel (Commands) being out of Regard (Zabeel).

Further back this is the family of last weekend’s Galaxy (Gr 1, 1100m) I Am Excited (Snitzel) and Group 3 winner Flippant (Hinchinbrook). 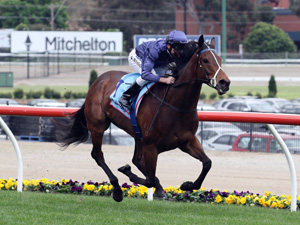