Five for Pride Of Dubai

Former Coolmore reverse shuttler Pride Of Dubai (Street Cry) continued his good season in the northern hemisphere as he sired his fifth first-crop winner when his daughter Malaysian (2 f ex Booker by Mastercraftsman) broke her maiden at the second time of asking at Cork on Wednesday.

After leading for the whole race, Malaysian looked to have the race at her mercy with a furlong left to travel and only had to stave off the advances of the fast-finishing Belmont Avenue (Zoffany), eventually beating him by a head. Always Waitin (Tamarkuz) finished another three lengths further back in third.

The filly was purchased by BBA Ireland for 27,000gns at Book 2 of the Tattersalls October Yearling Sale from the Islanmore Stud draft and she is the first winner of the winning Mastercraftsman (Danehill Dancer) mare Booker.

The son of Street Cry (Machiavellian) shuttled to Ireland for three seasons and now stands exclusively at Coolmore Jerrys Plains where his fee is advertised as $38,500 (inc GST).

Malaysian made all, just holding off late strike by Belmont Avenue to land the Watergrasshill Median Auction Maiden in good style for @TomSocksMadden and @Jessica_Racing pic.twitter.com/KSdG4GB4VC 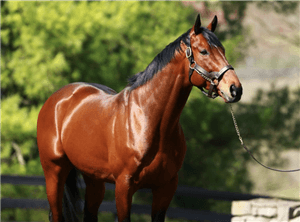