Sun Bloodstock Racing purchased the top lot at 200,000gns for a colt by Dubawi.

Offered early in the day as lot 35 from the draft of Adrian O'Brien's Hazelwood Bloodstock, David O'Callaghan signed for the colt out of the Irish St Leger (Group 1) winning mare Voleuse De Coeurs with Anthony Stroud left the underbidder.

"We've bought out the partnership," said O'Callaghan. "She was a very good mare and he is quite similar to her in looks – he had just been held up a bit and so had not sold earlier this autumn.

"This colt is a good mover and looks as though he will need some time – that is fine, we can give him time. He goes to David Simcock."

A daughter of Teofilo, Voleuse De Coeurs was originally raced by Lady O'Reilly before being purchased by Eliza Park International and transferred to Michael Moroney. In her first run in Australia she finished 10th in the Melbourne Cup (Group 1) behind Fiorente. Voleuse De Coeurs is a daughter of Vadorga making her a half-sister to 7 winners including the multiple Group 1 winner Vahormix. This is also the family of Group 1 winners in Val Royal, Valixir, Vadamos and Vadawina.

There were just 2 more lots who made 6 figures with a Sea The Stars filly selling to Alex Elliott, Agent for 100,000gns, the same price realised by a Golden Horn colt who was bought by Stroud Coleman Bloodstock.

The December Foal Sale begins its 4 day run on Wednesday. 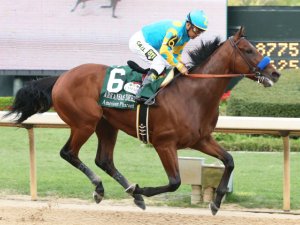