It has continued until very recently through both Aushorse and the TBA, not to mention Ken’s active involvement in the Drayton South mining issue. As a successful lawyer, Ken became Robert Sangster’s legal adviser in the late 1970s.

This was the beginning of Ken’s involvement at the highest levels of racing and breeding, starting with the sale of a package of foundation broodmares in the early 1980s from Sangster to Arrowfield.

Ken first visited the Hunter Valley in the late 1980s to assist Sangster and Hayes in the purchase and setting up of Collingrove Stud, primarily to secure rights to resident stallion Rory’s Jester.

Through Sangster, then a one-third partner in Coolmore, Ken met John Magnier and assumed responsibility for representing Coolmore’s legal interests in Australia, which included a joint venture with Arrowfield in developing the ‘shuttle stallion’ concept.

And it is that shuttle stallion concept that gave Australia, in particular the Hunter Valley, breed-shapers like Danehill, Last Tycoon and Fairy King, ancestors of Redoute’s Choice, Snitzel and Not A Single Doubt; of Fastnet Rock and Hinchinbrook; of Exceed And Excel; of Written Tycoon and Capitalist; of Encosta De Lago, Northern Meteor and Zoustar.

The shuttle stallion, too, gave Australia and the Hunter Valley also Yarraman Park sire I Am Invincible. Ken also enjoyed success as an owner which included racing Group One winner Irish Lights.

Intimately involved in Coolmore’s purchase of the original Arrowfield property – and of Danehill himself – Ken was then asked by John Magnier to stay on as Chairman of the newly-established Coolmore Australia, a position he has held to the end.

It was a position from which he influenced and mentored so many who play ongoing roles in development of the Australian and Hunter Valley thoroughbred, amongst them Michael Kirwan and Duncan Grimley, Peter O’Brien, James Bester and, of course, myself Tom Magnier.

Ken then sat on the board of the Commercial Thoroughbred Breeders Association and its successor Aushorse Limited, helping draft that body’s merger with the TBA, which merger still stands a decade-plus later.

The Australian breeding industry in general and the Hunter Valley thoroughbred in particular have much for which to thank Ken – not least, lest we forget, his opposition to the perennially-proposed Drayton South mine, against which Ken campaigned and spoke in person at all hearings devoted to resolution of that issue.

It is fitting, therefore, that at the Hunter Valley Breeders’ Association awards night before the 2018 Scone Cup, Ken, with his family in attendance, was honoured with that body’s highest accolade, the President’s Award - for his extraordinary contribution to the breeding industry in general and Hunter Valley in particular.

We at Coolmore can never repay the huge debt of gratitude we owe Ken for his work and wisdom, his advice and friendship to us all. He was a true friend and mentor and we will miss him greatly. 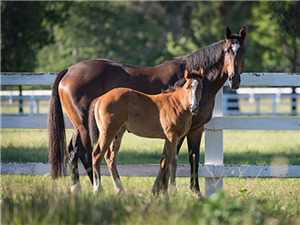