The Tattersalls December Foal Sale begun at Park Paddocks in Newmarket on Wednesday.


The Tattersalls December Foal Sale begun at Park Paddocks in Newmarket on Wednesday with 2 lots topping the session selling for 65,000gns each.

The second foal to realise this price was a daughter of Darley's Knight Of Thunder who was purchased by Jamie Railton from the draft of Genesis Green Stud.

Offered as lot 366, the March-foaled filly is out of the Where Or When mare Harlequin Girl who is a half-sister to the stakes winners Blaine and Bogart.

"She is a pinhook prospect," said Railton.

"I am a big fan of the family with Blaine and Bogart, while the two-year-old half-brother called Byline is well rated too.

"She is a fine horse and is a good advert for her sire.

" Knight Of Thunder, a son of Dubawi, shuttled to Australia for a single season only in 2016.

The first 65,000gns lot was a colt by El Kabeir who was bought by Stauffenberg Bloodstock Services. The colt, lot 326, is out of Invincible Spirit mare School Run with this being the family of Group 1 winning sprinter and former Aquis shuttler Dream Ahead.

Another 4 lots sold for over 50,000gns on Wednesday including a colt by another former Aquis shuttler in Holy Roman Emperor. Offered as lot 378, the colt was bought by Orchardstown Farm for 52,000gns.

The sale continues on Thursday. 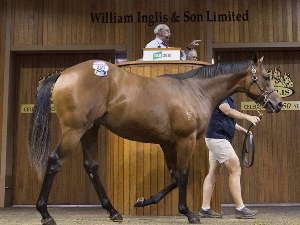