Trade stepped up a level on the second day of the Tattersalls December Foal Sale on Thursday.

Colin and Melba Bryce of Laundry Cottage Stud enjoyed a spectacular sale with their Bated Breath colt, who was offered as lot 623, was knocked down to Brendan and Ger Morrin for 185,000gns. Foaled on 5 February, the colt is out of the placed Proud Citizen mare Unnatural who is a half-sister to Group winner Land Of Dreams being out of Sahara Star. This is also the family of multiple Group 1 winner Fairyland as well as Now Or Never and Dream Ahead.

"He is a great physical, the best here today. He is by a sire who is on the upgrade and is supported by Juddmonte," said Ger Morrin.

The colt was consigned by Jamie Railton, who said; "It is a fantastic result for Colin and Melba. They are passionate about this business and put a lot of effort into it.

"This is a lovely colt and really impressive physical. I saw him in the summer and the plan had initially been to sell as a yearling, but he looked like such a good foal prospect."

Unnatural, who raced in Japan and was purchased at the 2014 Tattersalls December Mare Sale for 180,000gns, was represented at Book 2 of the October Yearling Sale by her Pride Of Dubai filly who realised 115,000gns.

Two lots sold for 150,000gns on Thursday the first of those being lot 545 who was bought by Yeomanstown Stud. Sold by Langton Stud the colt is from the first crop of Postponed and out of the winning Dansili mare Shemya.

"He is by an exceptional racehorse and this foal was our pick of the day," said Yeomanstown Stud's Roger O'Callaghan.

Later in the day agent Bertrand Le Metayer had to go to 150,000gns to secure a colt by multiple Group 1 winning shuttler Highland Reel. Offered by Newsells Park as lot 722, the colt is out of the stakes-placed mare Self Centered making him a half-brother to the stakes winning Feel Glorious, a daughter of Bated Breath.

"When a horse achieved what Highland Reel did as a racehorse you have to take note it is very difficult in this day and age for a racehorse to achieve what he did.

"This is a good-walking, quality colt he has everything going for him.

The sale continues on Friday. 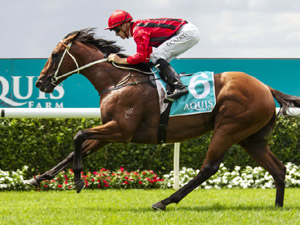