Two For No Nay Never

A dual stakes winner and runner-up at Grade 1 level in August, the Jorge Andres Inda-trained chesnut was sent off favourite for Monday's feature over ten furlongs. Fourth as they turned for home, she was travelling well at the 2 furlong marker and took the lead with ease soon after. Keeping on well under pressure, she won by an authoritative 3 lengths under Jeremy Laprida.

Owned by El Tata, Brooke was bred by Haras Don Alberto. No Nay Never's first Group / Grade 1 winner was dual Group 1 winner Ten Sovereigns who will stand his first season at stud this year at Coolmore's County Tipperary farm where his fee is set at €25,000. Winner of the Prix Morny (Gr 1, 1200m), No Nay Never was crowned champion first season sire in Europe in 2018 and he has 17 lots, from his second Australian-bred crop, catalogued for the Magic Millions Gold Coast Yearling Sale which begins its 6 day run next Wednesday.

No Nay Never shuttled to South America for one season only and his fee for the 2019 season at Coolmore Australia was set at $44,000 (inc GST). 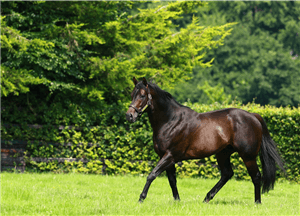