Leading international owner and breeder dies at the age of 83

Owner and breeder His Highness Prince Khalid bin Abdullah has died at the age of 83. One of the leading owners for the last 40 years, Abdullah's famous green, pink and white silks were carried to victory by over 500 stakes winners and of those 118 won at Group / Grade 1 level including in recent years unbeaten champion Frankel (Galileo) and multiple Group 1 winner Enable (Nathaniel).

Abdullah's first Group 1 winner came in the Middle Park Stakes (Gr 1, 6f) just a year after he had his first runners in Great Britain when Known Fact (In Reality) landed the Group 1 at Newmarket in 1979 before going on the following season to capture the 2000 Guineas (Gr 1, 1m). He was later retired to Juddmonte Farms in Kentucky.

"The whole of Juddmonte feels a huge sense of loss. Prince Khalid will always be remembered as a quiet, dignified, benevolent family man, whose horses spoke for him.

"He leaves a legacy that will stand the test of time. His contribution to the development of the thoroughbred will have long-lasting effects," said Douglas Erskine Crum, CEO of Juddmonte Farms.

"I know he got great satisfaction from Enable and I think it was probably one of the last times he went racing when she won the Arc for a second time.

"He was colossal in every sense of the word for our industry with stallions, mares and breeding operations which produced a host of top class horses  over nearly 50 years."

John Gosden who trained Enable said: "Prince Khalid Abdullah first enjoyed going racing in the 1950s as a young man in Paris. This sparked his bold and thorough plan to establish an international breeding operation in the late 1970s and was an illustration of his brilliant mind. In a period of 20 years he established himself as both a European and American champion breeder.

"His charming, urbane and humorous manner was coupled with a great strategic approach both in business and his horseracing and breeding operation. A very private and patrician gentleman, Prince Khalid was a very strong family man for whom it has been a great honour and privilege to train for 38 years." 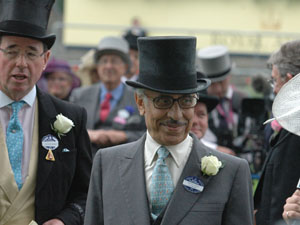