Weekend stakes round up

Catch up on which stallions have sired new stakes winners

Three for Honor Code
In winning Saturday’s Jockey Club Gold Cup (Gr 1, 10f) at Saratoga, Max Player (4 c ex Fools In Love by Not For Love) became the third Grade One winner for the Lane’s End Farm-based sire Honor Code (A P Indy). Max Player, a Grade Two winner previously, is one of seven stakes winners for Honor Code who has three crops of racing age.

15 for Sea The Stars
Baaeed (3 c ex Anhareed by Kingmambo) remained unbeaten when he stepped up in Sunday’s Prix du Moulin de Longchamp (Gr 1, 1600m), becoming the 15th Group One winner for his sire Sea The Stars (Cape Cross). The William Haggas-trained and Shadwell Estate Company homebred is now unbeaten in five career starts and on Sunday, he pulled clear to score by a length and three quarters from the Aidan O’Brien-trained Order Of Australia (Australia). Based at the Aga Khan’s Gilltown Stud in Ireland, Sea The Stars is the sire of 83 stakes winners and in Australia has produced 18 winners from 29 runners with five of those winning at stakes level.

27 for Shamardal
Darley’s late sire Shamardal (Giant’s Causeway) recorded his 27th Group One winner on Saturday when Emaraaty Ana (5 g ex Spirit Of Dubai by Cape Cross) won the Sprint Cup (Gr 1, 6f) at Haydock. The Kevin Ryan-trained gelding held on to beat favourite Starman (Dutch Art) by a head, with Chil Chil (Exceed And Excel) back in third. Shamardal died in April last year and his sire sons at stud in Australia include Blue Point and Earthlight.

First for Drefong
Geoglyph’s (2 c ex Aromatico by King Kamehameha) win in Saturday’s Nisai Stakes (Gr 3, 1800m) at Sapporo provided his sire Drefong (Gio Ponti) with his first stakes winner. The Shadai Stallion Station-based Drefong, a three-time Grade One winner in the US, has sired seven winners from 40 runners in his first crop.

189 for Exceed And Excel
Darley’s Exceed And Excel (Danehill) recorded stakes winner number 189 on Sunday when the Ed Walker-trained Great Ambassador (4 g ex Snoqualmie Girl by Montjeu) won the Garrowby Stakes (Listed, 6f) at York. Ridden by Tom Marquand, the Littleton Stud-bred gelding recorded a one and a half length victory over Tabdeed (Havana Gold). Exceed And Excel’s stakes winners are headed by 16 Group One winners and his 2021 fee is set at $132,000 (inc GST) after he covered a book of 103 mares at the same fee last season.

78 for Frankel
The Kevin Ryan-trained Triple Time (2 c ex Reem Three by Mark Of Esteem) became stakes winner number 78 for Frankel (Galileo) when he stepped up in class and landed the Ascendant Stakes (Listed, 1m) at Haydock on Saturday. The colt, who has now won two of his four career starts, kept on well in the closing stages to defeat the Charlie Appleby-trained Hafit (Dubawi) by a length and a half. The Juddmonte Farm-based Frankel, who is once again being offered to breeders to Southern Hemisphere time this season, has a strike rate of 15.7 per cent stakes winners to runners.

81 for Iffraaj
Former Haunui Farm shuttler Iffraaj (Zafonic) notched up stakes winner number 81 when Kitty Marion (5 m ex Pretty Primo by Kyllachy) won the Golden Peitsche (Gr 3, 1200m) at Baden-Baden on Saturday. The mare stayed on gamely in the closing stages to defeat favourite, Majestic Colt (Clodovil), by a neck with another four lengths back to Manjeer (Footstepsinthesand) back in third. Iffraaj’s son Ribchester now shuttles to Haunui Farm while Wootton Bassett has shuttled to Coolmore Australia for the first time this year.

34 for Motivator
Hamish (5 g ex Tweed by Sakhee) won Saturday's September Stakes (Gr 3, 1m4f) at Kempton on Saturday to provide his sire, the Haras du Quesnay-based Motivator (Montjeu), with his 34th stakes winner. The son of Montjeu (Sadler’s Wells) is also the sire of six-time Group One winner Treve.

157 for Pivotal
Varkesha (4 f ex Varana by Sea The Stars), an Aga Khan homebred, won Sunday’s Prix de la Cochere (Listed, 1600m) at Longchamp, becoming the 157th stakes winner for Pivotal (Polar Falcon). Pivotal, who is the sire of four-time Group One winner Addeybb - one of his 32 Group One winners, was pensioned from stud duties at Cheveley Park Stud in Newmarket earlier this year.

Three for Wandjina
The Nick Ryan-trained Express Pass (5 g ex Pass The Parcel by More Than Ready) provided Wandjina (Snitzel) with his third stakes winner when he won the Chautauqua Stakes (Listed, 1200m) at Moonee Valley on Saturday. Express Pass was bought for $38,000 by his trainer an JJ Consultants for $38,000 at the 2018 Inglis Melbourne VOBIS Gold Yearling Sale from the draft of Blue Gum Farm and he has now won five times and placed in another six of his 17 career starts. Wandjina is standing his first season at Larneuk Stud in Euroa this season and his other stakes winners are Group Two winner Mamaragan and Tiger Roar and he has produced a further ten stakes placegetters.

24 for Zoustar
Widden Stud’s Zoustar (Northern Meteor) sired his 24th stakes winner on Saturday when Zouzarella (3 f ex Zazparella by Al Maher) impressed in the Atlantic Jewel (Listed, 1200m) at Moonee Valley. Zouzarella was bought by Cambridge Stud for $250,000 at last year’s Magic Millions Gold Coast Yearling Sale when offered by Glastonbury Farm. Zoustar is the sire of two Group One winners to date in Sunlight and Zoutouri and his fee this year is $154,000 (inc GST). 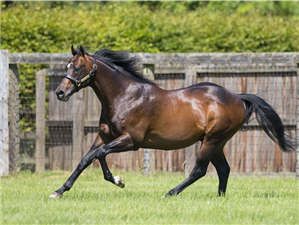