Calyx - a super-fast son of top-class stallion Kingman (Invincible Spirit) - will join the Coolmore Stud roster for the 2020 season and he will stand for an introductory fee of $17,600 (inc GST).

Juddmonte Farms-bred Calyx who is out of Group 3 winning two-year-old Helleborine (Observatory), who is herself a sister to Group 1 winner African Rose who produced Group 3 winner Fair Eva (Frankel). Further back this is the family of Group 1 winner and sire Distant Music (Distant View).

Trained by John Gosden, the colt retired the winner of three of his four starts which saw him amass £154,958 in career prize-money.

Calyx showed his precocious speed when taking out his only two starts as a juvenile winning his maiden at Newmarket by five lengths before taking out the Coventry Stakes (Gr 2, 6f) at Royal Ascot, beating multiple Group 1 winner Advertise (Showcasing) in the process, just ten days later.

"Calyx looked one of the most exciting Coventry winners for some time. The placed horses from the Coventry behind Calyx upheld the form afterwards, particularly runner-up Advertise who went on to win the July Stakes and Phoenix Stakes," Timeform.

The colt was kept in training as a three-year-old opening his account in the Commonwealth Cup Trial Stakes (Gr 3, 6f) and he then finished second in the Sandy Lane Stakes (Gr 2, 6f), before a leg injury prematurely curtailed his career. Upon retirement it was announced that the colt will stand at Coolmore Stud – with owner-breeders Juddmonte retaining an interest.

"Calyx always had that rare brilliance you only see in champions. He's very fast and a gorgeous-looking horse with a lovely mind," said Gosden. 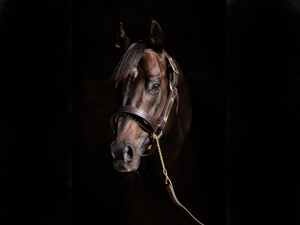