NZB announced that the Karaka 2020 catalogue of 1,265 yearlings is now available to view online.

New Zealand Bloodstock announced that the Karaka 2020 catalogue of 1,265 yearlings is now available to view online, with printed copies available from early December.

Karaka 2020 marks the third year of the refreshed Book 1, 2 and 3 format. The opening session of Book 1 will start at the earlier time this year of 11am on Sunday 26 January, in line with other days through the week, and Book 1 will conclude on Tuesday 28 January. Book 2 will run for 3 days from 29 January and in another change, Book 3, for which 115 yearlings are catalogued, will take place on the afternoon of Friday 31 January.

The Book 1 catalogue features 677 yearlings who have ample credentials to follow in the footsteps of the eight graduates of this session who have won at Group One level in the last 12 months. They include Kolding, who was one of Sydney’s spring stars and won the Epsom Handicap (Group 1) and the A$7.5 million Golden Eagle (1500m).

There are 473 yearlings in this year’s catalogue for Book 2, which is widely regarded as the value sale of the world. Hong Kong’s two-time Horse of the Year and the Longines World’s Best Turf Miler Beauty Generation was purchased for just NZ$60,000 out of this session.

In recent years, Book 3 has produced top performers such as Singapore stakes winner Gilt Complex and Group One winner Gaultier.

Karaka 2020 will showcase a quality line-up of 125 stallions, including local and international stars.

There are 73 sons or daughters of New Zealand’s dominant stallion Savabeel, who has been the most sought-after sire at the National Yearling Sales Series in recent seasons. His progeny amassed more than NZ$14m at Karaka 2019, including the sale-topping NZ$1.4m colt.

There are 20 yearlings by this season’s New Zealand premiership-leading sire Darci Brahma, who has been brilliantly represented during the spring by his New Zealand 2000 Guineas (Group 1) winner Catalyst (NZ).

Second-ranked sire Per Incanto has 35 yearlings in the Karaka 2020 catalogue, while there are 78 yearlings by Cambridge Stud star Tavistock, and 56 sons or daughters of high-class Haunui Farm shuttle stallion Iffraaj.

Notably, there are also 24 yearlings from the final New Zealand crop of former shuttle stallion Showcasing, who sired a record number of two-year-old winners in New Zealand last season.

The star-studded group of Australian-based stallions in the catalogue includes eight yearlings from the first southern hemisphere crop of American Triple Crown winner American Pharoah, plus big names such as Dundeel, Exceed and Excel, Fastnet Rock, Medaglia d’Oro, Not a Single Doubt, Sebring, Snitzel, So You Think and Zoustar.

The Karaka 2020 catalogue features siblings to 31 Group One winners, and the progeny of 18 Group One-winning mares. Lot 86 is a half-brother to New Zealand’s reigning Horse of the Year Melody Belle. Lot 150 is a full-brother to the Vinery Stud Stakes (Group 1) and Australian Oaks (Group 1) winner Verry Elleegant.

Lot 250 is a full-sister to Group One Australian Derby (Group 1) winner Tavago (NZ).

Lot 556 is a full-sister to triple Group One winner Gingernuts (Iffraaj), while Lot 605 is a three-quarter-brother to Coolmore Stud Stakes (Group 1) winner and young sire Flying Artie.

Lot 658 is a brother to the multiple Group One winner and young sire Kermadec.

Group One-winning mares with progeny in the catalogue include Katie Lee, Rollout The Carpet and Shez Sinsational.

The catalogue can be viewed here. 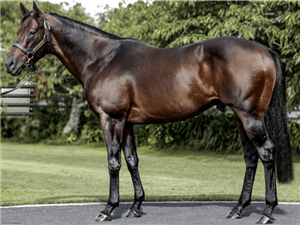