Purchased for a mere NZ$5,000 at the 2017 National Weanling, Broodmare and Mixed Bloodstock Sale, the three-year-old filly was settled into a smooth rhythm down the back of the track, but she struck another snag when she began to improve her position coming up to the home turn. With a number of fillies rapidly tiring in front of her, Jennifer Eccles clipped a heel and stumbled.

But Jason Waddell angled her into clear air, and the star filly quickly regained her balance and momentum. She soared to the front in the straight, and despite starting to tire over the last 100 metres, she cruised to an emphatic victory by a length and a half.

“Every Oaks win is a big win,” the Cambridge-based trainer said. “I love training these three-year-old fillies over ground.

“Keep The Peace was great, and the quinella for The Oaks Stud was wonderful as well, but this filly looks like she could be every bit as good as them – if not better.

“Jason Waddell is unbelievable. From gate 18, you wouldn’t believe he could get across to where he was by the time they went past the finish line for the first time.

“She’s a spectacular filly and has a great turn of foot. We had a few questions about the 2400 metres, especially after she raced quite aggressively in the Lowland last time, but she relaxed beautifully down the back straight.”

The filly is out of four-time winner Platinum Elle (Elnadim) and her third dam is the Group 2 winner Waikiki (Crested Wave), while further back this is the family of Group 1 winner Sacred Kingdom (Encosta De Lago). 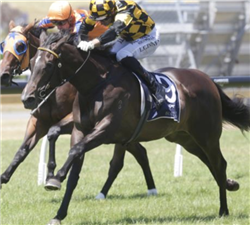