The Chris Gibbs-trained Dragon Storm (6 g ex Prize Lady by Prized) produced the performance of his life as he took out the New Zealand Cup (Gr 3, 3200m) at Riccarton on Saturday and in the process became the 11th stakes winner for Rich Hill Stud-based stallion Shocking (Street Cry), who was also the sire of the second-placed Lincoln King.

The six-year-old gelding came out on top of fierce battle up the straight to beat Lincoln King by a nose, while Hurry Cane (Nom Du Jeu) was another two lengths further away in third.

“With his breeding we all know he can stay but the beautiful big track here just suited him down to the ground,” said Gibbs.

“I don’t know about these nose margins though, as I think my heart is going to jump out of my chest.”

Gibbs had the option of taking his charge to Warrnambool later in the month for the Jericho Cup (4600m) after winning a qualifier last start, however he has ruled out the Country Victoria feature.

The improving stayer is likely to have a brief break before being set for a tilt at the Barfoot and Thompson Auckland Cup (Gr 1, 3200m) in March, while the NZ Campus Of Innovation and Sport Wellington Cup (Gr 3, 3200m) in late January is also a possible target.

“He can go to the paddock for a break now,” Gibbs said.

“It’s no use going to the Jericho as, when you win a race like this, you will be weighted out of it.

“It’s too soon for him as he likes to be raced fresh like his mother did.”

Prize Lady herself is a daughter of three-time Grade 1 winner Pen Bal Lady (Mummy’s Game) and in 2019 she produced a sister to Dragon Storm. 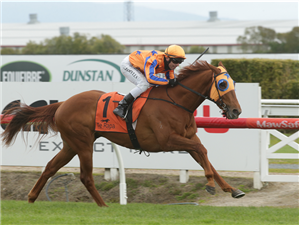