Waikato Stud’s Savabeel (Zabeel) sired the first two home in Sunday’s Te Akau Gingernuts Salver (Listed, 2100m) at Ellerslie with Milford (3 c ex Etiquette by O’Reilly) breaking his maiden and beating Cheaperthandivorce by a half length. Edge Of Wonder (Tavistock) was a long neck back in third.

Having the fifth start of his career and stepping up to 2100 metres for the first time, Milford was settled in behind the speed by jockey Leith Innes. He loomed up rounding the home turn and then ran on well to hold off the fast finishing filly Cheaperthandivorce.

The victory provided Savabeel with his 110th stakes winner and trainer Stephen Marsh said that Milford will now be aimed towards the New Zealand Derby (Gr 1, 2400m) in March with the Avondale Guineas (Gr 2, 2100m) in February to be used as a lead-up to the Group 1.

“He’s got any amount of ability, but he’s been quite green in his races to date,” Marsh said.

“We took the winkers off last time which probably didn’t work, but with those back on today he seemed to settle better during the running.

“He got a little bit lost coming around that last bend and took a few strides to balance up, but when he did find his feet again, he really put in nicely for an impressive win.”

Bought by Bruce Perry Bloodstock for NZ$360,000 at Book 1 of the New Zealand Bloodstock’s Karaka 2019 sale from the draft of Waikato Stud, Milford is the only winner out of the unraced O’Reilly (Last Tycoon) mare Etiquette who is herself a sister to multiple Grade 1 winner Sacred Falls (O’Reilly).

Savabeel sits at the head of the leading New Zealand sires table by earnings with his prize money over $550,000 clear of his nearest rival. Milford becomes the 20th stakes winner to be bred on the Savabeel / O’Reilly cross with that cross firing at a rate of 14 per cent stakes winners to runners. 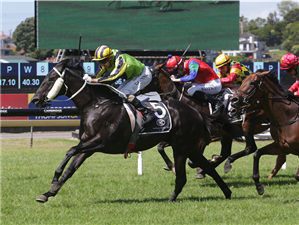