Egyptian Missile (Smart Missile) topped the final Inglis Digital sale of the 2020/21 season when bought by Cunningham Thoroughbreds, in conjunction with Clarke Bloodstock, for $230,000 on Wednesday.

Offered by Bjorn Baker Racing as a racing or breeding prospect, Egyptian Missile was bought by her trainer from the draft of her breeder Cressfield for $240,000 at the 2018 Magic Millions Gold Coast Yearling Sale. She went on to win three of her 18 career starts and placed in a further five starts. The daughter of Smart Missile (Fastnet Rock) is one of nine winners out of Group One winner Our Egyptian Raine (Desert Sun) making her a half-sister to the Cressfield raced and formerly Bjorn Baker-trained dual Group Three winner Egyptian Symbol (Stratum) and the stakes placed pair Strathmore (Fastnet Rock) and Cellsabeel (Hinchinbrook).

"She's going to visit Written Tycoon this coming season and will then head up to Ridgmont Farm in Scone," Mitchell Cunningham said.

"She obviously showed a lot of ability early on, running behind Libertini first up in the Listed Woodlands Stakes as a two-year-old.

"It's a progressive family and one full of quality fillies, there's her three-quarter sister Cellsabeel, while Egyptian Symbol has an I Am Invincible colt on the ground and is back in foal to him again.

"Plus her own dam Our Egyptian Raine was no slouch, being a Group One winner and Group One placed ten times!

"I think this is my first purchase on Inglis Digital, although I've had a few cracks this year, it's a good time to be selling.

"It was some bidding war, I had a meeting at 2.45pm but I had to miss it as I got caught up with the auction!"

Dual Group Three winner Holyfield (I Am Invincible) was purchased by Annabel Neasham for $180,000, while Australian Bloodstock secured metropolitan winner Acrophobic (Dissident) for $160,000 and will send him to Tamworth trainer Cody Morgan.

"These city grade to low level Stakes horses are impossible to buy but it's a good price for a rising four-year-old of his ability," Australian Bloodstock's Luke Murrell said.

"But we are going to give him a good break and look to target the Queensland races with him initially and I think in time he will be the perfect country cups horse.

"He is sound and tries hard and can race on speed and Cody Morgan has an excellent strike rate with these types in the past.

"We will find some owners and have some fun with him!"

The July (Late) Online Sale concluded with a gross of $3.45 million, which ensured the platform's overall turnover surpassed the $140 million mark. 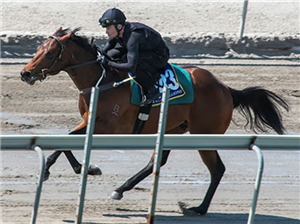