Enaya Alrabb topped the second session at the Keeneland, when she was purchased for US$640,000.

Enaya Alrabb - by Coolmore Stud's popular stallion Uncle Mo (Indian Charlie) - topped the second session at the Keeneland January Horses of All Ages Sale when she was purchased for by James Schenck for US$640,000.

Bred in Kentucky by Tony Holmes and Dr. and Mrs. Walter Zent, the now four-year-old ran second in the Starlet Stakes (Gr 1, 8.5f) as a two-year-old. Consigned by Paramount Sales she is out of the graded stakes-placed Lotta (Rhythm) and is a half-sister to graded stakes-placed gelding Hattaash (Strong Hope). Further back this is the family of Rachel Alexandra (Medaglia d'Oro).

Schenck was also responsible for purchasing the second highest priced lot of the session, when he went to US$560,000 for the Glen Hill Farm-consigned Confidently (War Front) on Tuesday.

The four-year-old filly, who was sold as a racing or breeding prospect, is out of three-time winning Arch (Kris S) mare Playa Maya making her a half-sister to dual Grade 1 winner and top-class stallion and former Coolmore Australia shuttler Uncle Mo, while she is also a sister to Irish 1,000 Guineas (Gr 1, 1m) runner-up Could it be Love.

The bloodstock agent also purchased Hot Blooded Girl (Tapit) for US$280,000 during Monday's opening session taking his total aggregate at the sale to US$1,480,000, which saw him take the mantle of leading buyer at the auction at the close of trade on the second day.

Meanwhile, it was Glen Hill Farm celebrating again as Grade 1-producing mare Inflamed (Unusual Heat) was snapped up for US$525,000 by Naohiro Hosoda, who signed the ticket on behalf of Terry Yoshida of Shadai Farm, at the Keeneland sale on Tuesday.

The mare was offered in foal to Darby Dan stallion Tapiture (Tapit), whose oldest crop are three-year-olds, having sired 26 first-crop winners in America last season, which saw him finish second behind fellow son of Tapit (Pulpit) in Constitution in America's first-season sires table by number of winners.

The mare already showed an aptitude for breeding when her first foal Mo Forza (Uncle Mo) landed the Hollywood Derby (Gr 1, 9f), a performance he then followed up in the Mathis Brothers Mile Stakes (Gr 2, 8f) on his next start.

Inflamed - by the late stallion Unusual Heat (Nureyev) - was bred in California by Madeline Auerbach, Barry Abrams, and Sonny Pais and is out of Little Hottie (Afternoon Deelites) making her a sister to La Jolla Handicap (Gr 2, 8.5f) winner Burns and to Grade 1-placed winner Brushburn.

Inflamed was a relatively new acquisition for Glen Hill Farm, with the operation having paid US$170,000 for the Paramount Sales consignment for the mare at the Keeneland November Breeding Stock Sale.

At the close of trade, Keeneland reported increases in both the average and median prices at the sale. 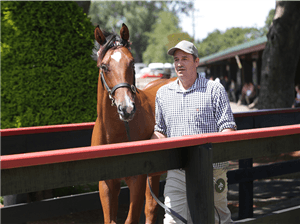