George Moore bought a colt by Starcraft for $340,000 at the Inglis Classic Yearling Sale.

KBL Thoroughbreds' Kandice Pritchard was one person celebrating on Monday after selling a colt by Starcraft (Soviet Star) to George Moore for $340,000 at the Inglis Classic Yearling Sale.

Offered as Lot 471, the colt is out of dual-winning Testa Rossa (Perugino) mare Sky Rubi, who KBL Thoroughbreds purchased for $11,000 at the 2018 Inglis Great Southern Weanling and Bloodstock Sale with the Starcraft colt in utero.

An emotional Pritchard was visibly delighted with the result with the colt the first yearling KBL have sold themselves.

"This is the first KBL baby to go through the ring," said Pritchard. "Brad [Lowe] bought the mare in foal so he is the first one bred that we've sold that we own."

Pritchard said the colt had taken a while to furnish, but had come together just in time for the sale.

"He was busy all week with 17 x-ray hits, but this was our first draft at the Classic Sale so I wasn't sure what to expect. It's just unbelievable," she said.

"He was a bit gangly as a youngster and I was wondering what we were going to do with the horse. He was very up and down - you've got to juggle them and treat them as individuals.

"He is just easy to do everything with and it makes it so much easier when they are very level headed which this colt is. That price was amazing. I just don't really know what to say - I'm speechless."

Testa Rossa has proved himself to be a good broodmare sire being represented by 19 stakes winners in this field, headed by four Group 1 winners including this season's Melbourne Cup (Gr 1, 3200m) winner Vow And Declare (Declaration Of War).

Moore was happy to be leaving the sale with the colt, rating him the best horses he had seen at the Classic sale in many years.

"That horse was probably the nicest horse I have seen in a long time at the Classic Sale and obviously I don't buy a lot of big horses," Moore said.

"There are only two other chestnut horses which that horse is reminding me of. He had the same exact walk, the same exact temperament and the same good drive behind. Able Friend was one of them and Aethero is the other one. They are exactly the same.

"I said to dad, 'we've just got to buy him'. Walking around he was very imposing and that is the sort of horse that we like.

"Last time we let a Starcraft go to Hong Kong, it turned out to be a Class 1 horse and this one gave me an even better feeling. I am really excited about the horse, so we would have gone to $500,000. Right now I own him with dad." 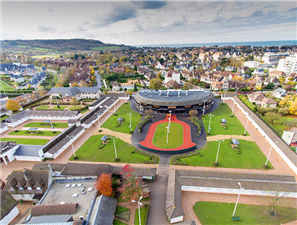