Just 23 lots have been catalogued for the Arqana Arc Sale which will be held in Saint-Cloud on October 3.

Included in the sale is Kalifornia Queen (Lope De Vega). A winner at two, the daughter of Lope De Vega (Shamardal) won the Diana Trial (Gr 2, 2000m) and placed third in the Derby Trial (Listed, 2200m) in June. She is catalogued as Lot 11 and is out of the Group 3 winner Kaldera (Sinndar).

The following lot is two-year-old filly Libertine (Dark Angel) who has won twice this year and is out of Miss Mariduff (Hussonet) making her a half-sister to the Australian Bloodsotck-raced Our Candidate (Camelot), who finished thid in last year's Newcastle Gold Cup (Gr 3, 2300m), as well as seven other winners including Italian Group 2 winner Porsenna (Dylan Thomas) and the dam of German 2000 Guineas (Gr 2, 1600m) winner Fearless King (Kingman). 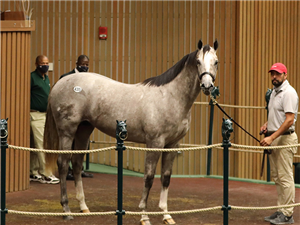