The 2021 Arqana Arc Sale catalogue is now availble in a digital format and comprises 40 horses, including 31 that have already won at stakes level. The printed version will be available uniquely on the day of the sale, Saturday October 2.

The first 40 horses catalogued for the sale include;

• Group Three winner Adhamo (Intello) will be offered by Frederic Head as lot 4. With a current rating of 107, the three-year-old colt is a homebred for Wertheimer & Frère colours

• Another Group Three winner is Penja (Camelot), who goes under the hammer as lot 11. Trained by Jean-Claude Rouget, the very consistent daughter of Camelot (Montjeu) has a current rating of 108, and is sold with an entry in the Prix de l'Opéra (Gr 1, 2000m).

• With a current rating of 103, the Jean-Claude Rouget trained Djo Francais (Intello) will be offered as lot 22.  A Listed winner, the son of Intello finished third in the Prix Daphnis (Gr 3, 1600m) at Deauville last month.

• Runner-up in the Prix Daphnis last time following a winning debut at Dieppe, Partenit (Invincible Spirit) is lot 26. Running in the colours of his. breeder Viktor Tymoshenko, the colt by Invincible Spirit (Green Desert) is out of the top family of Peintre Celebre (Nureyev).

• A winner of the Sparkasse Holstein-Cup (Gr 3, 1600m) at Hamburg, Reine d'Amour (Soldier Hollow) is lot 28 offered by Panorama Bloodstock. Trained by Marcel Weiss, the three-year-old filly has been running in the colours of Gestut Auenquelle. She has also won at Listed level this season.

• A winner of the Prix du Pont Neuf (Listed, 1400m) and most recently a winner over 1400 metres at ParisLongchamp, Coachello (Dunkerque) is offered by Romain Le Dren Doleuze as lot 31. The three-year-old gelding has a current rating of 106. 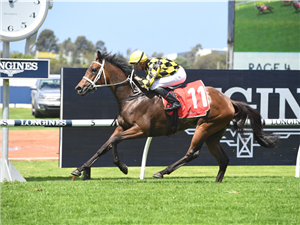