The evening is highlighted by a pair of Group affairs, the Group 2 Al Rashidiya for $6 million Dubai Turf sponsored by DP World (G1) aspirants and the Group 3 Al Shindagha Sprint for those with $2.5 million Dubai Golden Shaheen sponsored by Gulf News (G1) dreams. The card also showcases stayers in the inaugural running of the Listed Meydan Cup and gives dirt and turf milers a chance to shine in wide-open handicap company.

Over about nine furlongs on the turf, the Al Rashidiya has attracted a field of seven, including last year's winner Dream Castle , bidding to become the first dual winner of a race inaugurated in 2000 for Godolphin and trainer Saeed bin Suroor. The son of Frankel won this last year, having already landed the Group 3 (now G2) Singspiel Stakes and followed up in the Group 1 Jebel Hatta over this trip. The bay gelding has not won since his Super Saturday success early last March, subsequently disappointing twice in Europe, a pair of Australian races and again in the inaugural edition of the Listed Zabeel Turf Handicap over 2000m two weeks ago. Christophe Soumillon rides, while Pat Cosgrave will be aboard Listed-winning stable companion Mountain Hunter, a multiple Carnival victor.

"Dream Castle was frankly disappointing on his return, but came out of the race in good form," Bin Suroor said. "He has been working well and this 1800m on turf is probably his optimum conditions, so we were keen to run him in the race he won last year before making future plans. Mountain Hunter needed his comeback run and has a good record at Meydan and is ready to run a good race."

The market favourite is expected to be Godolphin's Charlie Appleby-conditioned Barney Roy , who will be joined by Group 2-winning stablemate Loxley in the gate. William Buick rides G1 winner Barney Roy, a 6-year-old who races for only the fourth time since 2017 after having missed all of 2018 with a failed stud attempt. James Doyle will guide Loxley, who was well beaten on his return in the aforementioned Zabeel Turf, finishing about six lengths behind Dream Castle.

"This has been a long-term plan for Barney Roy, who we hope is a Jebel Hatta horse," Appleby said. "If all goes well, the Dubai Turf would then be the goal. He is a class act, but will certainly improve for the outing. (Loxley) was a bit too free in that comeback race and never really found cover to help him settle. We are hoping the slightly shorter trip is in his favour and he will likely be ridden more positively."

The remaining trio—G2-placed Sharpalo for Ahmad bin Harmash, Mike de Kock's G1-placed Majestic Mambo and his former charge, Carnival winner Light The Lights (now with Satish Seemar)—would all appear to have something to find with the best of the Godolphin runners. Of the trio, Majestic Mambo benefits from seasoning, already with two races this Carnival, including a distant third in the course and distance Singspiel (G2) three weeks ago.

The dirt feature on the card is the Al Shindagha Sprint and has attracted a field of eight, easily led by defending champion Drafted , a clear divisional leader for the past year until four weeks ago when Satish Seemar-trained Gladiator King made a big splash on UAE debut. Seeking to become the first dual winner and fourth consecutive for trainer Doug Watson and jockey Pat Dobbs in a race, Drafted has trained forwardly since that run, but is, as always, at the mercy of the pace, being a stone closer.

NOTES: Watson Explains Drafted's Preparation and His Expectations for Thursday

Gladiator King, owned by Sheikh Rashid bin Humaid Al Nuaimi, was a private purchase last year from America, where he was a G3 winner in the Hutcheson Stakes over 1400m. He proved his prowess over 200m shorter in his local bow and looks to have benefited, as well, from the running for his connections. Mickael Barzalona, aboard for his win, returns to the saddle. Seemar also saddles another UAE debutant in G2-placed All Out Blitz, who was with Watson until two weeks ago, when transferred to Zabeel Stables. Richard Mullen rides All Out Blitz from the outside post eight.

Ibn Malik will look to do one better after finishing second in the Dubawi and winning two back in the Garhoud Sprint (Listed) over this trip. Jim Crowley is once again in the saddle from post three on the gritty 7-year-old son of Raven's Pass. The stalker is joined in the gate by fellow HH Sheikh Hamdan bin Rashid Al Maktoum colourbearer Alkaraama, who is expected to do the early heavy lifting from the six-hole with Dane O'Neill.

Irish gelding Alfredo Arcano drew post two under Pat Cosgrave for trainer David Marnane. The son of Arcano makes his dirt debut, but has flourished on the all-weather of Dundalk in his native country. He enters off a 1200m victory over that course on Dec. 13 and has had over a month to adapt since arriving. Expected to contest the Dubawi, he had a hiccup in his training and appears properly primed by his capable conditioner to resurface here.

A fast pace is expected, especially with the presence of Sweden's top sprinter, I Kirk , from the yard of Susanne Berneklint, and American import Truck Salesman , conditioned by Doug O'Neill. I Kirk was a winner here last Carnival before faltering to sixth in the Mahaab Al Shimaal (G3), while Truck Salesman is an improving type for his conditioner who is expected to show American gate speed in his local debut. Another with American form in his past, jockey Fernando Jara, takes the mount on the latter from post seven, while Carlos Lopez will ride from barrier four, one inside Drafted, with I Kirk.

Upgraded to Listed status, the 2810m Listed Meydan Cup Handicap on turf has attracted one of Europe's crack stayers in the shape of local debutant Dee Ex Bee. A 5-year-old Farhh entire owned by HH Sheikh Hamdan bin Mohammed Al Maktoum and now in the care of Salem bin Ghadayer, he is a winner four times in Great Britain for Mark Johnston and has bashed heads with the best stayers in the world, namely Stradivarius and Kew Gardens. A five-time G1-placed frontrunner who has won from 1400m-3200m, he appears to have this race at his mercy, despite carrying top weight of 60kgs, including jockey Mickael Barzalona.

Winner four weeks ago of the inaugural Listed Dubai Racing Club Classic Handicap, over 2410m on the turf for trainer David Simcock and owner Abdulla Al Mansoori, Universal Order has race fitness on his side and again has the assistance of Richard Mullen. Wickedly impressive when asked to quicken that day, he could be the main danger to the top-billed if he progresses.

Another with winning Meydan form in his corner is Dubhe, who joins 2017 Queen's Vase (G2) third Secret Advisor as representatives from the Charlie Appleby arm of Godolphin. Dubhe, who has the services of Brett Doyle under his 53kgs impost, was a smart winner over 3200m here last year, while Secret Advisor (Tadhg O'Shea up) enters off a pair of ho-hum efforts during the summer for his connections. Also wearing the royal blue will be Saeed bin Suroor-trained Dubai Horizon (Harry Bentley up), who looks to improve upon his eighth in the Jan. 16 Zabeel Turf (Listed) over 2000m.

A well-balanced field of 10 is set for the evening's 1600m handicap in which many will be looking to improve their rating enough to be considered for March's $1.5 million Godolphin Mile (G2) over the same course and distance. Doug O'Neill-trained American invader Fight On leads the ratings at 105, but must concede significant weight to all of his competitors, while Doug Watson starts two who appear to have considerable claims in this spot, the improving Golden Goal and mercurial Galvanize.

Dubai Legacy, who is bred beautifully to handle the dirt on surface debut, being a son of Discreet Cat out of a Tiznow mare, is likely to get plenty of attention for Godolphin, Saeed bin Suroor and jockey Christophe Soumillon. Meanwhile, Satish Seemar-trained Irish Freedom need only return to his USA form of two seasons and three starts ago to be a main player.

Good Fortune looks to bounce back from a lukewarm 2020 debut when fourth as favourite in 1600m handicap company on Jan. 9 and appears once again the horse to beat for jockey William Buick, trainer Charlie Appleby and owner Godolphin. His main competition includes Lyndon B of the George Scott yard, who looks to improve off his local bow, as well as David O'Meara-trained Firmament, who was second in Good Fortune's heat of that split handicap. Of note is Saeed bin Suroor-conditioned Godolphin runner Land of Legends, a three-time winner last summer whose best makes him a serious player in this spot.

The nightcap is, per usual, a perplexing full field of 16 set to go the one-turn 2000m of the turf course. While Godolphin looms large with the likes of 2019 Carnival winner First Nation and Appleby-trained stablemate American Graffiti, all eyes will be on HH Aga Khan's Simsir, who was impressive closing to be second in the Zabeel Turf (Listed) astern Certain Lad, who also returns for Mick Channon.

Saeed bin Suroor-trained Global Heat gets a proper weight break in this spot and must be respected under Harry Bentley, while Rastrelli has every right to improve from his local bow when third on Jan. 9 to Key Victory over 1600m—a trip slightly below his best. Others of note are Doug Watson-trained Gabr, who looks to bounce back to his class-filled form after three poor local starts, as well as former Andre Fabre trainee Ahesta Bero, a conditions winner over this distance in France who starts for the same team as Rastrelli, trainer Simon Crisford and owner Ahmed Ali.

The Purebred Arabians start the card with a wide-open renewal of Round 2 of the Al Maktoum Challenges. A winner last year when this race was over 2200m, Goshawke appears one of the main places under Pat Cosgrave, riding for Al Ajban Stables and Abdalla Al Hammadi, who also have Octave among the ten runners.

"The conditions should suit Goshawke and we are expecting a good run," Al Hammadi said. "We think Octave merits his place in this company and will find out on Thursday."

Runner-up in the 1600m Group 1 Al Maktoum Challenge R1, staying on late, was Cheik Roque whose trainer Erwan Charpy was encouraged by the uptick in form.

"The trip should be ideal, Charpy said. "He is training well and we hope for a big run in an open renewal."

Others of note include AF Al Sajanjle, who exits a good third in his 2020 bow and has the services of Tadhg O'Shea for reigning champion trainer and owner, Ernst Oertel and Khalid Khalifa Al Nabooda. Meanwhile, trainer Eric Lemartinel saddles Amwaj, the mount of Fabrice Veron for His Highness Sheikh Khalifa bin Zayed Al Nahyan, and Richard Mullen rides Ziyadd for Jean de Roualle and Yas Racing—two horses who should definitely figure with their best efforts. 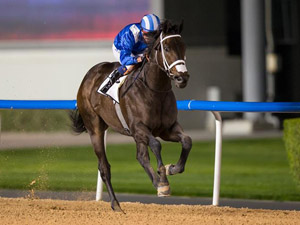