Brazilian jockey Fausto Henrique is enjoying his best season in Macau and moved closer to securing second spot in the Jockeys’ Championship with a treble on Friday nights sand card.

Henrique was in hot form and kicked the night off with a win on the Wayne Smith trained Pursuing Eagle  in the opener the Maiden over 1050 metres.

Pursuing Eagle is a two year old son of Holy Roman Emperor (Ire) who was lining up for his fifth race start and quickly took command of the race out of the gates to lead and score well.

Race favorite Éclair Mirage from the K H Leong yard was the second of Henrique's winners when he overcame a bad getaway to come from the tail of the field in a fine piece of riding by the Brazilian, to score by a nose from Pearl Lucky (Roger Yu), with Bring Me Power (Shogo Nakano) back in third.

Henrique capped off his night with a win on the problem plagued Smart Win who bolted away with the Class 1 & 2 over 1350 metres.

Smart Win is an Australian import prepared by Ricky Choi who made it win number three in Macau, all at the 1350 metre trip on the sand. The former West Australian galloper who raced there as Nightwatchman has been in Macau for over two years, however has been sparingly raced due to tendon issues and breathing problems.  Ricky Choi has done a fine job with the six year old to patch him up and get him back to the winners circle.

Henrique is now on 36 winners for the season and whilst the Jockeys' Premiership is a done deal with Luis Corrales racing away with his fifth title currently with a 15 win lead on 52 winners, Henrique is only one win behind Roger Yu who is in second spot.

First season trainer Wayne Smith picked up a winning double over the weekend with both Pursuing Eagle and his very promising four year old Chi Chai Sin Sang who both scored impressive wins.

Chi Chai Sin Sang  made it two wins on the trot when he raced away with the Class 3 & 4 over 1500 metres under five pound claimer Eric Cheung, to give the apprentice a double for the weekend.

Chi Chai Sin Sang is a son of Per Incanto (USA) and is an ex Aquis Farm galloper that placed second in trials at the Gold Coast and Newcastle prior to being sold onto Macau.

The gelding took awhile to come to hand but has now won three races from his past six starts and handled the rise in class and distance on Sunday admirably.

The wins by both Chi Chai Sin Sang and Pursuing Eagle were some consolation for the short head defeat in last Sundays SJM Derby by the stables best horse Star Of Yiu Cheung, who was caught in the last stride by Sacred Magnate.

With only 122 runners for the season Smith has now prepared 10 winners in his first year, not bad when you consider he has made the quinella spot on 13 occasions and some of those efforts very close calls and often without luck.  Currently Smith has 16 horses in his barn and like all Macau trainers he is anxiously waiting for the Covid 19 travel bans to be lifted to top up his stable.

Partners' Fortune made it three wins straight when he powered home over his rivals in the first of the day the 2 & 3 Year Old Handicap over 1200 metres.

A son of Better Than Ready (Aus), Partners Fortune has looked very impressive in all three wins unleashing a brilliant last two hundred metre finish and is destined for better things.

Lee and Ho combined later in the day with Ronson who came from last on the corner to snatch victory away from Heat Of The Battle (Massa Tanaka) in the Class 4 & 5 over 1200 metres.

Ronson is a son of Eurozone (Aus) and had been disappointing in his first seven runs in Macau before turning the corner at his latest run over 1500 metres, where he ran on well for fifth only beaten one length.  Sundays win suggest there is more to come for the three year old now that he has found form. 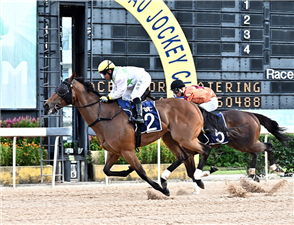