Sacred Caps Off A Great Season For Lau

Sacred Capital has made it back to back Macau Gold Cup’s in a heart stopping finish when he prevailed by a nose over Star Of Yiu Cheung, in Sundays Group 1 event over 1800 metres at the Taipa race track.

Ridden by Peter Ho, Sacred Capital  was put into a lovely position from barrier 11 to be fourth the rail soon after they turned out of the straight.

Star Of Yiu Cheung under Fausto Henrique had set up a clear lead as they went into the backstraight, before Ho took the initiative to let Sacred Capital stride forward to get on his tail from the eight hundred point.

Coming to the home turn it was obvious that the Gold Cup was just a two horse affair; Sacred Capital went after Star Of Yui Cheung with the pair going head to head and over the last one hundred, with Sacred Capital just getting the bob in on the line to win.

Prepared by master trainer Joe Lau, Sacred Capital was coming off a brilliant win in the Group 1 Chairman's Memorial Cup over 1200 metres on Derby Day, and Sunday's win was his fourth Group 1 victory.

The lovely looking son of O'Reilly is the perfect racehorse having won from 1050 metres on the sand to 1800 metres on the turf. He handles any type of going and in races from 1500 metres and upwards has enough speed to put himself into a gun position irrespective of the draw.

"That was a great win. He really had to dig in hard there to beat Star Of Yiu Cheung who I think is an outstanding racehorse." Joe Lau said.

"It was another great ride by Peter (Ho) and again the horse gave his all and we had to break the race record to win it."

"I've had some good horses over the years like Crown's Master , Crown's Gift and Polish Warrior they all won lots of big races for me, but this horse is the best. He is so versatile and a complete racehorse."

Sacred Capital's run time of 1.45.8 snipped .01 of a second off Wonder Mossman's Class standard set in 2013 and is now the Macau Gold Cup record time.

Lau made it a quick double for the afternoon when The Macallan under jockey C F (Charlie Chan) led throughout to bolt away with the Class 2 & 3 over 1800 metres.

Taking control of the race out of the gates, The Macallan  rolled along freely in front before stretching his lead over his rivals from the six hundred. It was game over at the top of the straight as the son of Rock'N' Pop ran to the two fifty with a six lengths margin before coasting to the line for an easy win over Fantastic Friends (J B Hamel), with Magnapegasus (Eric Cheung) a close third.

"He needs a firm track and likes to roll along on the lead, and the way the track was playing to the front runners he was going to take some running down today."

"It's another great day and it's all a team effort with my assistant trainer Wil Heffernan and all the staff who share the credit."

The Macallan like Sacred Capital is raced by Mr Eric Chen Ching Lung. The double capped off a great season for both owner and trainer. Eric Chen's superb four year old Sacred Magnate grabbed a last stride victory over Star Of Yiu Cheung in the SJM Derby last month, giving the owner his fourth Macau Derby and after Saturday his second Macau Gold Cup.

Fortune Treasure  has been a model of consistency for trainer K H Leong since arriving in Macau, and on Sunday picked up his first Group victory in taking out the Group 3 Macau Sprint Trophy over 1200 metres.

Fortune Treasure is a former Mick Price galloper that raced in Victoria as Smoke Signal. He won a Maiden race at Sale in Victoria from his seven starts in the Price yard, before being exported to Macau.

The gelding loves the 1200 metres of the Taipa track having now won six races over the trip with a further six placed efforts; add to that two wins over 1050 metres on the all weather, the son of Dalakhani (Ire) has been a very nice buy for owner Mr. Leung King Wui.

The final race of the season went to the Patrick Lee trained Dutch Shell, who scored per medium of a lovely ride under apprentice Eric Cheung to take out the Class 4 over 1500 metres.

Cheung did a superb job of navigating a path from gate nine to find the rails by the first turn into the back.  The gelding traveled nice in the run mid the rails before easing into space at the top of the straight, and went home too well for Georgian Ease (Luis Corrales), with the fast finishing Satono Eternal (Tshwaro Appie) flying from the tail of the field for third.

It capped off a nice season for former Champion trainer Patrick Lee who only operates a small team nowadays; Lee trained 24 winners from only 124 runners and picked up 15 placings as well.

For Eric Cheung it was win number 19 for the season after missing a few months at the beginning of the season through injury.

Luis Corrales was crowned Champion Macau Jockey for the fifth time on Sunday with 57 winners over Fausto Henrique and Roger Yu in second spot both on 40 winner each. 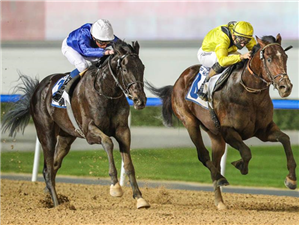