Another Top 3YO Sold To Hong Kong

The connections of classic placegetter Arrogant have accepted an offer too good to refuse for the 3YO from Hong Kong interests.

Arrogant, second in the G1 Rosehill Guineas in March, has been sold to clients of the Caspar Fownes stable for a reported seven-figure amount.

The Ocean Park colt, trained by Mike Moroney, joins a growing list of this season’s top staying 3YOs to be sold to Hong Kong.

Arrogant was offered for sale as a yearling at the New Zealand Bloodstock Karaka Premier Sale where he was purchased by Paul Moroney for $NZ130,000.

Arrogant has won only one race in 10 starts but his value soared with his placings in some top Group races in NZ and Australia including a second in the G2 Waikato Guineas, fourth in the G1 NZ Derby and second in the G1 Rosehill Guineas.

He last raced in the Australian Derby at Randwick on April 6 where he finished ninth in heavy going.

Mike Moroney said Arrogant could be a worthy contender for the Hong Kong Derby.

"It's a disappointment to see him go but it is a seven-figure sale and they don't come along very often,” he said.

"We wish Caspar Fownes all the best with him. There will be no one prouder than Ballymore Stables should he go on to win the Hong Kong Derby." 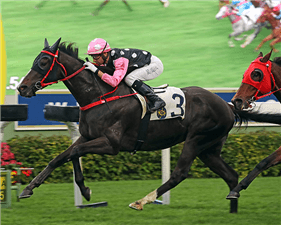