Joao Moreira’s season ignited with a bang this Sunday (8 September) at Sha Tin as the Brazilian ace opened his account with a treble.

"This is what every jockey wants to do, fortunately we were able to make it today, I hope that's not it – there is more to come," the former champion jockey said.

Moreira, who drew a blank on opening day last week, kicked off his three-timer with Fortune Happiness (133lb) who ran away with the opener. His second win came aboard maiden galloper Dollar Reward (121lb), and he wrapped up his haul aboard Silver Fig (122lb) in the Class 3 Seymour Handicap (1200m).

"I knew I would have better rides when it came to the second and third meetings, so I didn't panic, I knew I was doing the proper job and I was talking with as many trainers as I could. They were kind enough to support me with good rides and I'm very pleased and glad to be able to kick off, there is plenty more to come," he said.

Of the trio, Silver Fig was the quality standout, impressing both Moreira and trainer Tony Millard with his Class 3 triumph.

"I've always thought the world of him. He's been very unlucky a couple of times but the beauty of him is that he's so versatile and can run both (dirt and turf)," Millard said.

Silver Fig chased down tearaway leader Winner Supreme and managed to kick on past that rival, going onto score by a commanding three lengths.

"He's got a very good pedigree and anything can happen. We had one or two setbacks but he's a proper horse now. He knows what to do and I'm very excited about him," Millard added.

Silver Fig debuted last term in Class 4 off a 52 rating and had risen to a mark of 69 for this afternoon's task. The gelding is likely now to sit on the cusp of Class 2 depending on how the handicapper views this latest success.

Meanwhile, Millard and Moreira had to settle for second place with Elusive State (130lb), first-up over a distance short of his best in the Class 2 Po Yan Handicap (1200m) – Big Time Baby won the contest for trainer Manfred Man and jockey Matthew Chadwick.

But Millard is optimistic that his improved six-year-old can continue progressing towards an ambitious international target.

"I didn't expect him to run that well but in another two strides he's there. He never had a break the whole race but he still ran on and that's just his class and he could be an international horse. He needs a little help to get him to Dubai and what's also been thrown into the field now is the new race in Saudia Arabia," Millard said.

With US$20m on offer, the Saudi Cup on 29 February will be the world's richest race, and, while conceding that Elusive State needs to keep improving to earn a place, Millard remains upbeat.

"No-one wants to say he's that good at this stage but what's good about the Saudi race is that it's over 1800m - and that is exactly what Elusive State wants. He's the type of horse who's progressive and if we can get him in the right spot you never know what might happen," he said.

Douglas Whyte had only one runner on the card but Hong Kong's newest trainer made it count as Big Fortune (128lb) powered away in the Class 4 Tung Wah Group Of Hospitals Challenge Cup Handicap (1200m).

Ridden by Alberto Sanna, the son of Moshe broke well and made all to give Whyte his first cup race victory and the second win of his training career, remarkably from only eight runners for a 25% strike rate.

"It's going to sit well on the mantelpiece, my first cup ever. Again, it's not about the class of the race, it's about the particular horse that's let down for me today," Whyte said.

The 13-time champion jockey, 47, is utilising his talents in the saddle to aid the training of his horses and admitted the five-year-old has not been the most straightforward stable acquisition.

"He's proved a bit of a difficult horse in that he has been too keen. I think in some of his races it proved that he's over-raced maybe and he doesn't tend to hit the line as strongly as he can," the South African said.

The win, meanwhile, was Sanna's first success since 16 June, ending a three-month run of outs after returning from two injuries.

"Alberto Sanna, he's done a lot of work for me in the mornings, he's a lovely guy and he just needs a break and rode the horse 10 out of 10," Whyte said. "I'm just happy for him because he puts in a bit of effort in the mornings and he deserved a winner."

Sanna arrived in Hong Kong at the back end of the 2016/17 racing season and is looking to put his frustrations behind him.

"I cut off my holidays to come back and do work after 10 days in Italy, I came back to focus in on the new season because I wanted to start in good shape, so I don't have to lose weight," Sanna said.

"I knew Douglas as a legend in Hong Kong but what surprised me was that he was the first to talk to me in the jockeys' room when I first arrived, we got along straight away," Sanna said.

Based at Olympic Stables near the home turn at Sha Tin, Whyte has a further four entered for Wednesday's (11 September) first race meeting of the season at Happy Valley.

Veteran galloper Lotus Breeze scored the fifth win of his career at start 67 in the Class 5 Hollywood Handicap (1400m), giving both Chad Schofield and Chris So their first wins of the new season.

So made it a double with Invincible Missile (123lb) in the Class 3 Po Yee Handicap, thanks to a determined Zac Purton, who scored a double.

California Legend made all under Karis Teetan in the Class 4 Caine Handicap (1600m) to give leading trainer Tony Cruz his fourth win this season.

Teetan struck again in the Class 4 Po Hing Handicap aboard the Paul O'Sullivan-trained Destin. O'Sullivan made it a double when the Purton-ridden Cool Team claimed the finale. 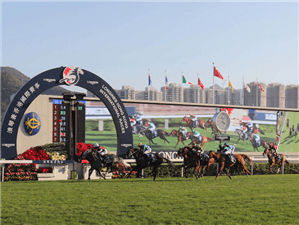