Preciousship (121lb) capped a hat-trick for Ricky Yiu with a gritty success in the Class 2 Choi Wan Handicap (1600m) at Sha Tin this afternoon (Saturday, 8 February).

The trainer's treble ended a 35-race run of outs that stretched back to 15 January, but the blossoming Preciousship's fourth score at his sixth start this term catapulted Yiu back to the top of the premiership, two ahead of Francis Lui who had edged into the lead on Wednesday night.

The Iffraaj gelding broke cleanly to settle midfield but encountered trouble on the turn for home. Yiu was full of praise for Vincent Ho's patience atop the Irish Listed winner.

"It was a little bit bumpy in the run but Vincent (Ho) did the right thing, he took a sit and he caught a second breathe so he could accelerate again and when he does that you're almost certain that he will give everything," Yiu said.

The Aga Khan Studs-bred gelding rocketed to a rating of 93 ahead of this race, having risen 23 points since he banished his Hong Kong maiden tag five starts ago.

"We'll see how his rating goes - he's 93 now, so if he does stay under 100 he'll carry a fair bit of weight now, but he's done well, so we might give him a little break to freshen him up," Yiu said.

Yiu went on to seal his three-timer when Lone Eagle (133lb) ground his way to a breakthrough triumph in the Class 3 Kai Yip Handicap (1200m, dirt) under Derek Leung.

"He's a morning star working on the dirt, he tries very hard, he goes like lightning," Yiu said, "he had a bad draw today but maybe it helped him because he didn't have any kick-back."

Gold Chest steals it in a thriller

A stalking ride from Matthew Poon saw the wide-finishing winner pip Duke Wai by a nose. The latter, like the victor, ran on from deep but a near-perfect ride from Karis Teetan was not enough this time.

"He missed the kick a bit but he wasn't too far away and I could see the favourite (Duke Wai) was very close to me, so I just tried to stay with him and I was very lucky - it worked out so well!" Poon said.

The win makes it two this season for the Richard Gibson-trained gelding, who arrived in Hong Kong having won a Listed race at Newmarket in Great Britain.

"He travelled very well during the race, I was happy to let him settle behind that horse Duke Wai, before getting clear over the last 200 (metres), and I had a light weight," Poon said after nailing his 14th success this term and his first for Richard Gibson this season from 11 pairings.

Teetan was pleased with Duke Wai's gallant effort in defeat despite failing to make it five wins in a row.

"It was so tight, I'm still very happy with my horse's run, he ran a great race again," Teetan said.

Meanwhile, Voyage Warrior (133lb), who lugged top-weight and raced prominently, showed that he should still be a force in higher grades in time as he finished sixth, only three-quarters of a length behind the front two.

"1700 wins - that's a very important milestone in my life and also in Hong Kong," Moore said. "But, getting back to the horse that did it, the enigma – Savvy Seven! He's been trying so many times to finally win a race."

Moore has been a record-breaking trailblazer in Hong Kong since gaining his licence in 1985. He is Hong Kong's longest-serving and winning-most trainer, netting an all-time record prize money haul of HK$2.03 billion since taking over from his legendary father George Moore.

"It'll go down in folklore," he said, before adding, "I was lucky enough to start training at 35 years of age which is where I had the big advantage."

But it was in lowly Class 5 that the Australian handler hit his latest milestone. Savvy Seven, a 22-start maiden before today, got home by a neck under Frenchman Alexis Badel.

"To do it with a Class 5 winner, especially the enigmatic Savvy Seven - it's amazing he could never win a race, and I got totally fed up with all the expectations around (him), but then he goes and does it today to put my 1700th win on the board,"

"I'll have to go back and give the horse a big kiss and bucket full of carrots," he laughed.

Moore outlined his ambitions for the second half of the Hong Kong racing season, which includes a hoped-for second big race win at Meydan.

"To win Group 1s and hopefully go to Dubai and win a Group 1 there," Moore said when asked.

The 69-year old has three horses entered for the Dubai World Cup meeting in March, with reigning Horse of the Year Beauty Generation in the G1 Dubai Turf (1800m) and Sha Tin 1000m track-record holder Aethero in the G1 Al Quoz Sprint (1200m) his big hopes.

Chad Schofield returned from an eight-meeting suspension with a winner as Circuit Three (118lb) cruised to an easy success in the Class 3 Lei Yue Mun Handicap (1400m).

"I knew he had a good finish and I knew dropping in weight would make his finish just as good even up in grade but today he really impressed me - he really let go quickly and quite hard. It's good to get a win back and also for Tony Cruz - hopefully there is more to come," Schofield said.

The Tony Cruz-trained gelding burst clear at the 200m mark to score and make it two wins from three starts this campaign. The five-year-old was sold at the 2018 Hong Kong International Sale and is a now a three-time winner from 11 attempts.

Joao Moreira racked up a treble, kicking off aboard Excel Delight (115lb) in the Class 4 Ngau Tau Kok Handicap for John Size. He followed that with a dashing run from the rear aboard Fantastic Show (120lb) in the Class 4 Sau Mau Ping Handicap.

The championship leader made it three in the nightcap and took his tally for the term to 72 as Beauty Loyal (120lb) held on ahead of a wall of challengers in the Class 3 Lei Yue Mun Handicap (1400m). Race favourite Farhh Above (130lb) was squeezed for room in the straight but let down for an unlucky dead-heat fourth.

Champion jockey Zac Purton was on the mark in the opener as El Jefe stormed down the stand-side rail in the Class 4 Lok Wah Handicap (1000m). 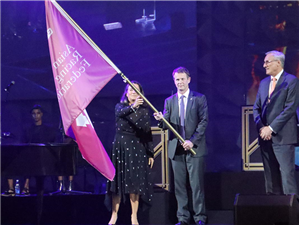