#7 Spicy Really has been relatively consistent across his career without setting the world alight. Still, he's shown enough to suggest that now, off a low mark in Class 5, he could spark the necessary improvement to win. #10 Moneymore falls into a similar category. He's also still winless, though across 21 starts and off his latest run if he manages to improve off that, he is a chance to figure in the finish, especially from the good gate. #4 Roman Odyssey is a winner already this term. Admittedly he does race better at Happy Valley but still, in Class 5, he is stepping out off a winning mark again. #12 Whistle Up is winless across 27 starts. He's running out of chances but still, off a low mark in Class 5 he still warrants respect if he manages to find himself in the right spot.

#12 Dr Proactive is a much better horse than his record suggests and if he can put his best foot forward from gate one he just might be able to surprise this field at a price. #14 Green Envy is lightly raced but has shown glimpses of ability across his short six-start career. The light weight and positive draw should offer him every opportunity. #6 Voyage Star led and won well three starts ago and again, if he tries the same here, rates as a leading player. #3 Winning Brew stepped out and grabbed third on debut. Zac Purton now takes over riding duties and although he's drawn wide, he clearly has enough ability to overcome this hindrance and put his best foot forward.

#5 Perfect Match steps up to Group level for the first time this Sunday but does so over his preferred course and distance where he is a six-time winner from eight attempts. This won't be an easy task but from gate three, with only 113lb on his back, he rates as the one to beat. #1 Thanks Forever is the class horse of the race with a rating of 123, largely thanks to his runner-up efforts at G1 level. He was an excellent G3 winner last start over 1200m but this time will have to do so over 1400m, which does make things a bit tricky and if, he does open a short price, he could be worth opposing. #3 Jolly Banner is consistent and is a G3 winner already, scoring in the Bauhinia Sprint Trophy over 1000m last year at 89/1. He has claims but it's tough to see him challenging the above two. #2 Fat Turtle is a handy horse. He's next best and did go close last time out behind Thanks Forever last start at G3 level.

#8 Happy Victory steps out for his third start for new trainer Tony Millard. The South African maestro has an excellent record with stable transfers and this galloper appears to be no exception. He's improved sharply in both of those runs for his new handler and with further improvement here, he is the one to beat. #5 Golden Link narrowly missed last time out by a neck for championship leading trainer Ricky Yiu. He ran a blinder that day and from the soft draw with Joao Moreira up, he gets every chance to repeat and go one better here. #1 Magic Supreme won well last star. He remains in Class 4 and with Alfred Chan's claim it wouldn't surprise to see him go back-to-back. #9 Jade Theatre can finish thereabouts and should improve switching back to the turf.

#3 Sky Field couldn't have trialled any more impressively than he did. He clearly has ability and if he manages to translate that form to the races off that leg-stretch on the dirt, then he's going to take a power of beating. #1 Yee Cheong Pegasus has gone to a new level this campaign for trainer Tony Millard with two wins and four runner-up efforts to his name from six attempts. He's consistent and is performing well this term and with even luck his good fortune can continue here. #9 Lucky Guy has the runs on the board and he is a two-time winner already from 45 outings. He's drawn to get the right run as he attempts to end a three year drought without a win. He has race experience on his side. #14 Adonis is a two-time winner already this term. He gets in with only 114lb on his back and with a clean run in the finish, he can figure.

#1 Gala Night can find the front here from the inside gate for Vagner Borges who clearly knows how to rate a front-runner. This is a suitable contest over his preferred trip and with the right run out in the lead, he can show that he is capable of pinching this. #10 Good Days has gone close on a number of occasions of late, finishing runner-up on three occasions out of his last four runs. This is once again a suitable contest and with a race run to suit, he is capable of testing this bunch. #6 Bullish Glory is searching for back-to-back course and distance scores. He remains in Class 4 off that performance which suits and the inside gate should afford him every opportunity. Karis Teetan remains up and his riding style clearly gets the best out of this Michael Chang galloper. #9 Exaltation is tough and shouldn't be too far away.

#4 So We Joy is so close to a breakthrough victory and it could very well come here. This is a suitable contest much like his last run and if he can overcome the awkward draw, he's going to be the one to beat. #13 Wonder Express won well two starts ago. He gets in light here with only 118lb on his back and from gate two, should figure in the finish. #3 Enjoy Life is looking for back-to-back wins. He's in solid form with two runner-up efforts prior to that and from the gate, he shouldn't be too far away. #9 Super Winner has been somewhat of a conundrum across his career, appearing to struggle to fulfill his early potential. Still, he's not without a chance if he positions himself close to the speed early.

2019 Hong Kong Derby winner #2 Furore has been racing up in grade all season and still, has been performing very well. He gets to his distance here and from the draw, with the right run, his best can outclass this bunch. #4 More Than This is racing well but at times can prove to be his own worst enemy. He regularly leaves himself with too much work to do in the run but still, on his day has shown the ability to win a contest like this and if he gets all the favours throughout, he's an excellent chance. #7 Helene Leadingstar is a course and distance winner already this term. He's in good form and if he can dictate the pace to suit himself up in front, then he could take a power of running down. #1 Southern Legend beat Beauty Generation two starts ago. He's classy but he's up against here with top weight duties, especially as a number of these get a near 20 pound swing in the weights.

#12 Merrygowin mixes his form but he wasn't too far away over this course and distance three starts ago, suggesting that with a similar run here, he could pinch it. He not only finished alongside Lakeshore Eagle that day but he was also blocked for a run at crucial stages, that horse has since won three in a row and now sits at the top of Class 2. #11 Flying Sword ran a blinder last start, rattling home for a close-up second. He'll be doing similar to the horse listed above and with the right run, is worth including. #2 Picken won well two starts ago and though he mixes his form he is a two-time winner this term who is capable of adding another. #3 Fantastic Show won four in a row before finishing third last start. Still, he's racing well and this is well within his grasp but he will be coming from the tail of the field.

#5 High Rise Soldier closed impressively last start for a close-up second. His racing pattern is becoming costly with two runner-up efforts from his last three outings but, he still rates as a leading player and with the right run, he can take this contest out. #4 The Rock grabbed third at his only career-start in January, 2020. He's not been seen at the races since but if he's sound and brings his best, he's capable of testing this lot. #3 Amazing Chocolate has twice bolted in from his last three outings, latest, a crushing five-and-a-quarter lengths win which resulted in a 13 points rating rise. Still, he remains in Class 3 which helps and deserves respect purely off that last performance alone. #11 Le Terroir is a much better horse than his record suggests. Admittedly he is better at Happy Valley with four wins to his name at the city circuit but still, if he manages to find that spark he had earlier this season then he's capable of figuring in the finish.

#8 Biz Power is lightly raced but did manage to close impressively last time out for second. Zac Purton retains the ride here which is suitable and from the draw, with even luck, he is the one to beat, so long as there is further improvement. #10 Big Fortune gets in well at the weights with a handy 10 pound claim from Jerry Chau. He's drawn to get the gun run and on his day, is up to this level of racing. #5 Good Luck Friend is two wins from four starts and is looking to go back-to-back here. In his favour is that he remains in Class 3 and with Joao Moreira up again, he has to be included, especially for championship leading trainer Ricky Yiu. #12 Eligere has the ability but does need a lot to go his way. He bears close watching. 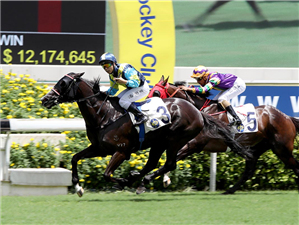