Selections and Analysis for Wednesday’s (14/10/20) race meeting at Happy Valley.

#11 Tigerlad has largely struggled across his career in Hong Kong but he has shown flashes of ability, albeit infrequently. He's down to a career-low mark of 20, 32 points lower than his debut figure and at the bottom of Class 5, he could now be ready to showcase his best. #2 Green Envy has relished the dip to Class 5, narrowly missing first-up by a neck. He made ground from the tail of the field impressively that day and with a race run to suit here, he can again make his presence felt. The last time #1 Regency Gem contested a Class 5 he won and did so with Zac Purton in the plate, who now, reunites with the galloper for Wednesday's test. He's drawn to get the gun run and he's a big threat. #4 Fox Cheunger is next best off the back of his last-start success at Sha Tin.

#3 Thunder Stomp is a pretty handy galloper on his day and if he manages to find the front against this bunch, then he could prove difficult to reel in. He's done it before and it wouldn't shock to see him do it again, especially with a handy five-pound claim from apprentice Victor Wong. Trainer Peter Ho is still searching for his first win this season and #8 Wood On Fire shapes as a strong hope to get the handler on the board. He's shown steady improvement across his career and in a tremendously difficult contest, he does pose a threat. #2 Sumstreetsumwhere gets 10 pounds off his back thanks to Jerry Chau's apprentice claim. He's looked primed to win a race early on this season so it's possible he challenges for this contest. #6 Royal Racer is looking for back-to-back wins. The wide draw hurts his chances but he is a horse in form from an in form stable.

Another tremendously difficult affair. #7 Happily Friends profiled well first-up albeit at a big price and again, he might be worth taking another chance on here. He should be even fitter with that run under his belt and with the right run, he can figure at a big price. #4 Whiskey Neat is on an upward trajectory and he appears ready to now take the next step. The booking of Joao Moreira warrants respect and he should be around the mark once again. #1 Glenealy Generals is a two-time Class 4 winner. Zac Purton hops up off the back of an impressive trial score. He bears close watching. #11 Happy Tango has ability and he can't be dismissed.

#10 Wins All has an awkward gate but still, the manner of his win last start was impressive and he appears capable of going on with it again here. #2 Momentum Galaxy put barrier issues behind last start to get up and win at 28/1. He's only a small horse but he does own a slick 57.04s personal best over this course and distance. #1 Simply Fluke is on the seven-day back-up. He's racing well and should be in the money once again. #11 Destin does his best racing fresh and from a soft draw, with no weight on his back, he should get his chance.

#4 Telecom Rocket has three runs under his belt this term and if he's continued to hold his form, he could well be rewarded with a win here. He rattled home without luck last time out but this time, from the soft gate he should get every chance. #1 Hercules won well first-up and in his favour is that he remains in Class 4 following that win. Zac Purton sticks aboard and he looks to be heading in the right direction. #5 Oriental Elite is at a competitive mark and does do his best racing at the city circuit. #8 Here Comes Ted flashed into third first-up. He's found his groove and is one to watch closely with that fresh run under his belt.

#4 Green Reign dashed home in a recent trial at Happy Valley and off that, he does appear ready to fire first-up for championship leading trainer Caspar Fownes. The inside gate suits, as does the booking of Joao Moreira which should give him every chance to finally get a win. #2 Prime Minister comes out of the same trial. He sat on the speed that day and then gave a nice kick in the straight. #8 The Runner has the runs on the board and is a two-time course and distance winner. He performed well first-up for new trainer Frankie Lor and he's in the mix, no doubt. #10 Harmony N Home is next best.

#6 Xiang Bai Qi loves the Happy Valley 1800m and with two runs under his belt already this term, he should be race-fit to perform at his best. He won when third-up last season and he profiles to do similar again. He'll need luck from worse than midfield but he does run a very strong nine furlongs. #3 Namjong Plus is a three-time course and distance winner. He rattled into a close-up second last time out and he should relish the step up to his favourite trip here, especially with the booking of champion jockey Zac Purton. #12 Red Elysees gets 15 pounds off back his back following his last run in Class 4 and although he steps up in grade now, the handy weight swing holds him in good stead. #11 Tangmere mixes his form but looks primed to run a big race with Joao Moreira up once again.

#4 Enjoying returned in bright order first-up down the straight at Sha Tin, flashing late from the tail of the field to finish off nicely. He'll benefit from the step up back to a suitable trip and he's worth taking a chance on here at a big price. #2 Buddies is a classy on-pace galloper who from gate three, with a 10-pound claim is the one who is going to roll forward and try to pinch this. He'll look the winner for a long way and he's also worth supporting. #3 Not Usual Talent narrowly missed behind Mighty Giant last time out and he should relish the step up in trip on offer here. He owns a slick 1m 38.66s personal best and if he runs up to that level here, he's sure to run a bold race. #9 Green Luck races well fresh and is sure to be in the mix. 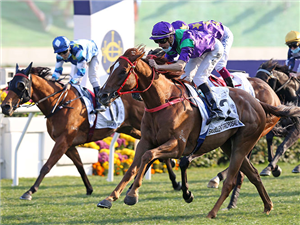