#10 Shanghai Power won well at his final outing of last season, leading from the get-go to score narrowly. He gets another chance here and his most recent first-past-the-post trial effort was encouraging. #1 Farm Bumper returns to Class 5 where he was a winner last time. He'll roll forward and take his chances under apprentice Jerry Chau. #6 Chunghwa Jingshen appears in solid form. He only needs to offset the wide draw. #9 Joy Avenue catches the eye with Zac Purton engaged. He'll be closing strongly.

#6 Romantic Trove has gone close a number of times already, and he's shown across the off-season that he is improved, sharply. He gets an excellent chance to get on the board here, especially with Joao Moreira up. #5 Happy Profit has plenty of ability and it's nearly surprising to see that he is still not a winner from six starts. Zac Purton hops up and he'll be fighting out the finish. #1 Beauty Amigo is a winner in the grade above, albeit a while ago. #4 Daily Beauty is a model of consistency. Don't discount.

#11 Sure Win Win is racing in superb form off the back of consecutive wins. Since then, he's trialled very well between seasons and his fitness could see him prove difficult to reel in. #6 Piano Solo is conundrum but he definitely has ability. Zac Purton sticks aboard and he deserves another chance. #7 Zhan Jiang Rocks shouldn't be too far away from gate three. He's consistent without winning but it won't be a shock to see him pinch one soon. #3 Dream Warriors rarely finds himself out of contention.

#9 Fortune Carrier did well at the back-end of last term and he looks set to make an immediate impact here, ahead of his second campaign. He gets plenty of favours including the draw and booking of Zac Purton. #1 Aurora Pegasus draws well and looks to be a very good winning chance for new boy Luke Ferraris. Top weight is tough but he is a two-time winner in this grade. #8 Red Majesty steps down in trip which is a concern, though, he will roll forward. #4 Red Brick Fighter gets his chance. He races well fresh.

#1 Joyful Win is a tidy little galloper with two wins from eight starts. He draws well for Harry Bentley who should be able to ensure he has a smooth run in transit from gate four. #3 Party Warrior has a stack of ability and he shapes as the main danger. There's a bit of pace on in this race and he's the one who can fly home from the back to mount a challenge. #4 Infinity Win is expected to roll forward and find a spot close to the speed. He's smart and does own a tremendous cruising speed. #8 Cheval Valiant is next best.

#6 Gallant Crown has done plenty in the off-season and he looks well placed to perform first-up. He's a four-time course and distance winner who from gate four, looks the one to beat. #10 Nothing New has a bit of class about him. He slots in light and won't look out of place against this bunch at the bottom of the handicap. #3 Wealthy Delight is solid and capable of testing this bunch. #1 Sunny Star is smart and deserves plenty of respect as a four-time winner from 13 starts.

Surprising that #6 Heart Conquered is not already a winner. He's knocked up a number of competitive performances and he should get every chance with even luck from gate four. #7 Our Creed hasn't shown much but he does regularly set the trials alight. Suspect he rolls forward here in attempt to make all and he is well worth supporting. #12 Trader is a smart on-pacer who is also likely to go forward. The light weight suits his chances and he commands respect. #3 Resolute is next best.

#3 The Runner did an incredible job to hold on for second last start after travelling three-wide throughout. He looks to have held his condition well between seasons and gate five enhances chances, ensuring a smoother run in transit under jockey Derek Leung. #8 Rhapsody is up to this grade and only needs luck from gate 11 to be ultra-competitive. #4 Decisive Twelve has a stack of ability, although his best performances have come at Sha Tin. #1 Winning Method gets back to Class 3 which is a positive. Don't discount. 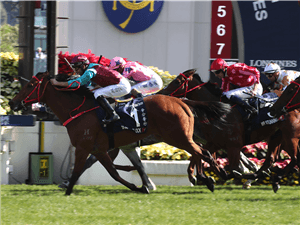