Selections and analysis for Sunday’s (9 Jan) fixture at Sha Tin.

#9 Raging Blaze raced without luck last start. He draws well here and with the last crack at them in the straight he is capable of winning. He's improving and should do so once more. #10 Golden Mission is consistent in his spot. The light weight suits and he should be thereabouts as per usual. #2 Tronic Mighty steps down to Class 5 for the first time with Joao Moreira engaged. Big watch on him now in the bottom grade. #6 Telecom Missile has claims. The wide ally makes life tricky however.

#2 Metro Warrior doesn't win out of turn. Still, he's ultra-consistent and that reliability can be rewarded here. #1 Gold Chest steps down to Class 3. This is a suitable drop and his best over this course and distance holds him in very, very good stead. Big danger. #5 Alcari surprised two starts ago at 78/1. Joao Moreira hops up now and he can bounce back to that level of form here. #9 Wild West Wing is worth including. He won well last start. The light weight suits.

#2 Team Spirit is racing well. Expect he finds the front once more and with a break on the field at the turn for home, it wouldn't surprise to see him kick on with it here. #7 Gallant Express is doing well without winning of late. He gets his chance again here. #4 Armour Eagle is lightly raced with only three starts to his name in Hong Kong. He's coming to hand nicely and Joao Moreira just might getting aboard at the right time. #6 Double Six Pop did well prior to import. Don't discount.

#14 Smiling Face might be good value here. He closed off in style last start and once again with no weight on his back he gets his chance. He's worth taking a chance on. #8 Ingenious Fellow is in sound enough form. He can improve once more from the good draw. #10 Dragon Pride is after back-to-back wins. He won well last time out and his ascent through the grades does not look done. #6 Brave Power is after a hat-trick. This looks tricky, however, his form of late is very good, to say the least.

#3 Noble Desire narrowly missed last time out. He's put in a number of good runs down the straight in the past and it wouldn't shock to see him win here. Expect another big run from the incredibly consistent galloper. #1 Eight Trigrams can bounce back to form here. He scored nicely three runs ago and has claims if he can repeat that effort. #2 Whizz Kid is closing in on a first win. Don't discount. #11 Glenealy Generals is value. He's worth supporting on an each way basis, especially if he is a big price.

#1 Pins Prince finds a winnable contest. He can bounce back to winning ways here, especially considering he's held his form and retains the services of Joao Moreira. #3 Turbo Power gets handy five-pound claim with Alfred Chan aboard. He should press for the front. #8 Smart Leader is better than his form suggests. He's the value and is worth supporting as a blowout chance. #4 Infinity Win can make his own luck out in front. He should be thereabouts, although the wide gate isn't ideal.

#5 Beluga draws well and steps into this off the back of a near-miss in a strong race at Happy Valley. If he brings that form here then he is the one to beat. #2 Ima Single Man is after back-to-back wins. He had the favours last start but still, a repeat of that run has him fighting out the finish. #4 Master Delight is showing very good progression early on. He looks like a very good four-year-old. #9 The Irishman falls into a similar category. He closed off impressively last start. He has claims but inexperience in Hong Kong may get him.

#6 Running Glory performed well last start, narrowly missing over the course and distance. The form out of that race looks strong and this contest – while difficult – appears ideal. #5 Super Mission is close to another win in Hong Kong. Expect another big performance from him here. He's worth supporting. #3 Good Runner is after back-to-back wins. He's racing well and gate two gives him every chance. #8 Vukan narrowly missed at his latest run. This is tough but he should finish thereabouts.

#5 Happy Daily didn't have one of the best runs throughout last start but he still managed to stick on and score a first win. Expect another big effort here. #4 Fantastic Show closed off very well last time out. He can do the same again and at a price he is worth supporting on an each way basis. #1 Good Buddy has won two out of his last three starts. He's racing well and gate two will afford him his chance, even with the top weight. #11 Hk Dragon shapes as a bit of a wildcard. He might be worth supporting on an each way line.

#6 Craig's Star is performing better than his record currently indicates. He's been without luck the past few times and does deserve a bit of forgiveness. Expect from the wide gate he's able to peel out and let rip in the straight. #2 Private Rocket is the main danger. He's in superb form and is capable of bouncing out of the ground at any time. Each way, all day. #10 Parterre is closing in on a first win. Joao Moreira hops up now. #4 Golden Link returns to seven furlongs. This is a plus. 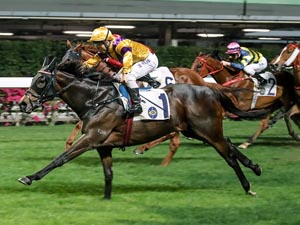