Celavi out to add turf string to her bow

Michael Clements hopes that the myth his smart sprinting mare Celavi is a dud on turf will be dispelled as soon as this Saturday.

A record of all her seven wins exclusively captured on the Kranji Polytrack has unsurprisingly created that mindset she is tailor-made for the all-weather, and rightly so, but the 2020 Singapore champion trainer said racing statistics can be just numbers at times – they don't always add up.

Even though the Fighting Sun five-year-old, whose last win was her feature race breakthrough in the Group 3 Merlion Trophy (1200m) at Kranji's last 2021 meeting on November 27, has only one third to show for from three stabs at turf from her 12 career starts, Clements said she had excuses.

"She ran on turf three times without winning, but I think it's fair to say she wasn't right then, she wasn't at her best," said Clements who opened his account at the second 2022 meeting with a treble courtesy of The Shadow, South Of The River and Mortal Engine on Saturday.

"Now that she has come to hand in the last six months, and produced her best racing of late, I feel there is no real reason why she shouldn't go well on turf.

"Breeding-wise, she should be okay on turf as well. No doubt, she's more proven on Polytrack, but if she's going as well as she's been of late, it's worth having another go and we can then see how she goes."

It's a brave call, but the proof of the pudding is in the eating. The Zimbabwean-born trainer is running Celavi in this Saturday's $100,000 Kranji Stakes A over 1200m on turf.

Defying surface stereotypes is one thing, but denying smart rivals, who furthermore, tick the turf box, is another.

"Kharisma and Makkem Lad are two horses who are in form, plus they have good turf form," said Clements.

"A lot will depend on the barrier draws. Regardless how the speedmap unfolds,Celavi  will stick with the same style of racing of going forward or racing handy."

Clements won't cast his eyes only at the head of affairs as he also saddles Starlight, who, although he posted the first two of his four wins by leading, is more noted as a backmarker these days.

The son of Headwater has one advantage over his stable companion, though. He has grass covered, and is no one-trick pony as he has shown form on both surfaces – he won the Group 2 Singapore Three-Year-Old Classic (1400m) last year, and also ran second to Celavi in the Merlion Trophy.

"Starlight ran second in the Merlion Trophy even though he's more proven on turf," said Clements.

"He comes in better at the weights this time compared to what he did at weight-for-age in the Merlion Trophy. Celavi is also well in on weights.

"Starlight's fit and well, just like Celavi. They both had only a couple of weeks off during the December break, it was more of a freshen-up and they've both been back in work for a while."

Regular partners Louis-Philippe Beuzelin, who returns from a two-day suspension for careless riding, and Shafrizal Saleh, are booked on Celavi and Starlight respectively. 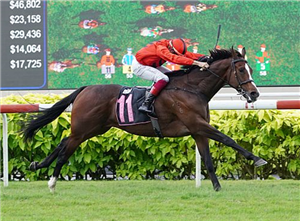