Ninth favorite Lauda Sion landed his first career G1 title in this year's NHK Mile Cup. The Real Impact colt won two out of three starts between 1,200 and 1,400 meters before finishing eighth in his first mile challenge in the Asahi Hai Futurity Stakes (G1, 1,600m) as a two-year-old. He kicked off his three-year-old campaign with a win in the Crocus Stakes (Listed, 1,400m) and finished second in his last start, the Falcon Stakes (G3, 1,400m) in March. The NHK Mile Cup victory was the second JRA-G1 title for trainer Takashi Saito after his winning the Shuka Sho with Chrono Genesis last year. Jockey Mirco Demuro, who also won the same race last year with Admire Mars, scored his 32nd JRA-G1 victory with his latest G1 victory being only last month in the Osaka Hai with Lucky Lilac. Lauda Sion is among the first crop sired by Real Impact (JPN, by Deep Impact) and the first G1 winner produced by the 2011 Yasuda Kinen and 2015 George Ryder Stakes victor.

Lauda Sion, who had come off a runner-up effort in a 1,400-meter sprint in March, broke sharply and disputed the lead with Resistencia before Mirco Demuro eased the keen son of Real Impact back in second. Settling well while never more than half a length behind the race favorite and pressing the pace, Lauda Sion demonstrated his strength with perfect timing as Resistencia started to weaken in the last furlong and drew away with ease to win by a comfortable 1-1/2-length margin.

"I knew that the track today ran better for front runners, and considering that he's usually an evenly-paced colt, I planned to keep him well up in front. He's always quick out of the gate so we were able to secure a good position and I felt he had plenty to outrun Christophe's filly in the final stages," commented Mirco Demuro.

Race favorite Resistencia, six kilos less from her last start, broke smoothly from an inside draw and took command after a brief duel with Lauda Sion, maintained her lead halfway into the straight and dueled again with the eventual winner before giving way in the last furlong for second.

Gilded Mirror was given a smooth ride under Yuichi Fukunaga behind the leaders in sixth position along the rails and, while having to edge his way out for a clear path for the stretch run, came out of a three-horse rally to finish 3/4-length behind Resistencia. 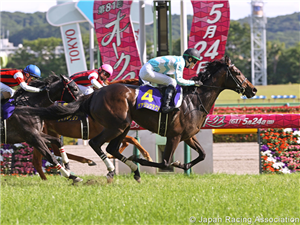